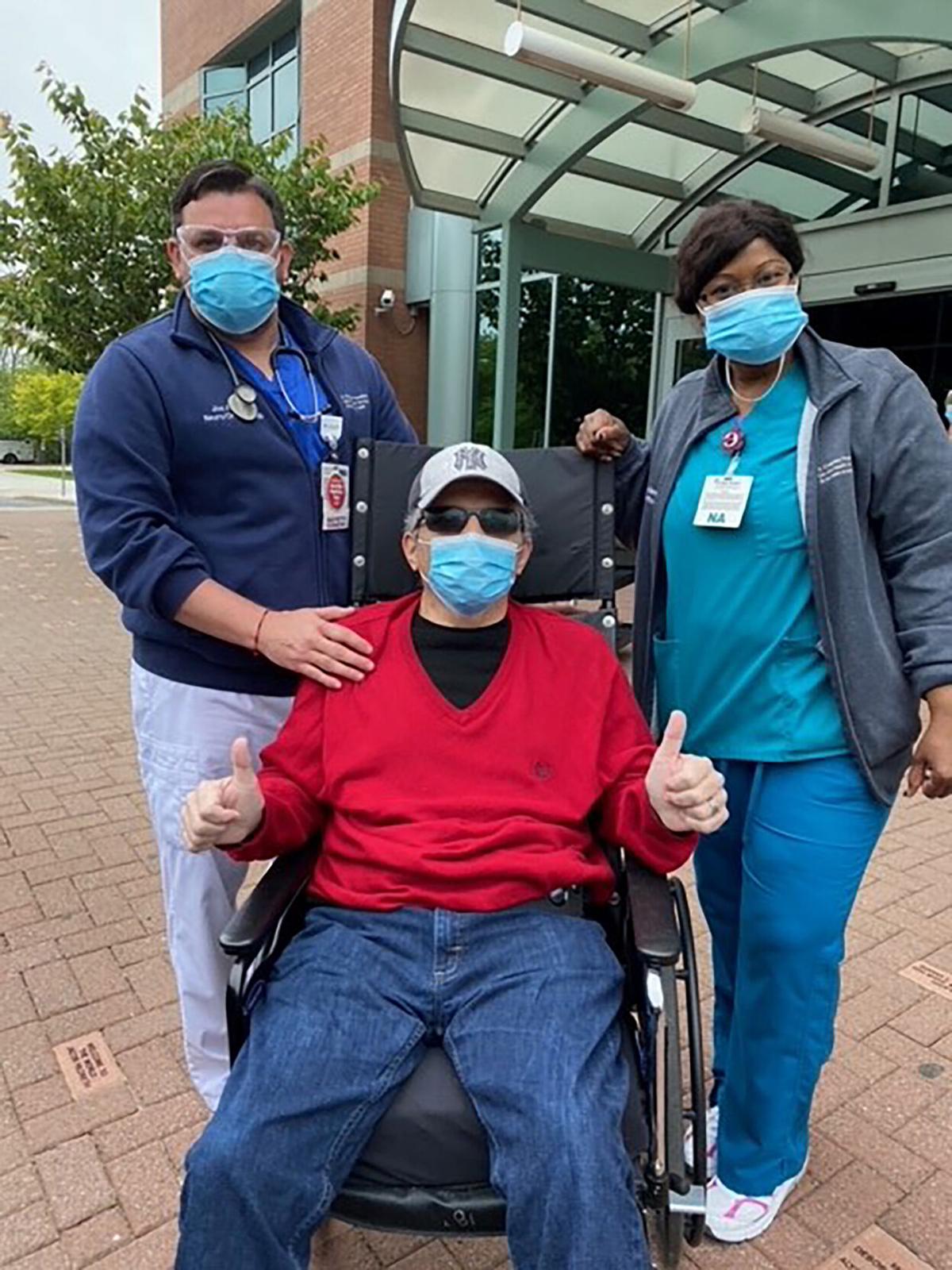 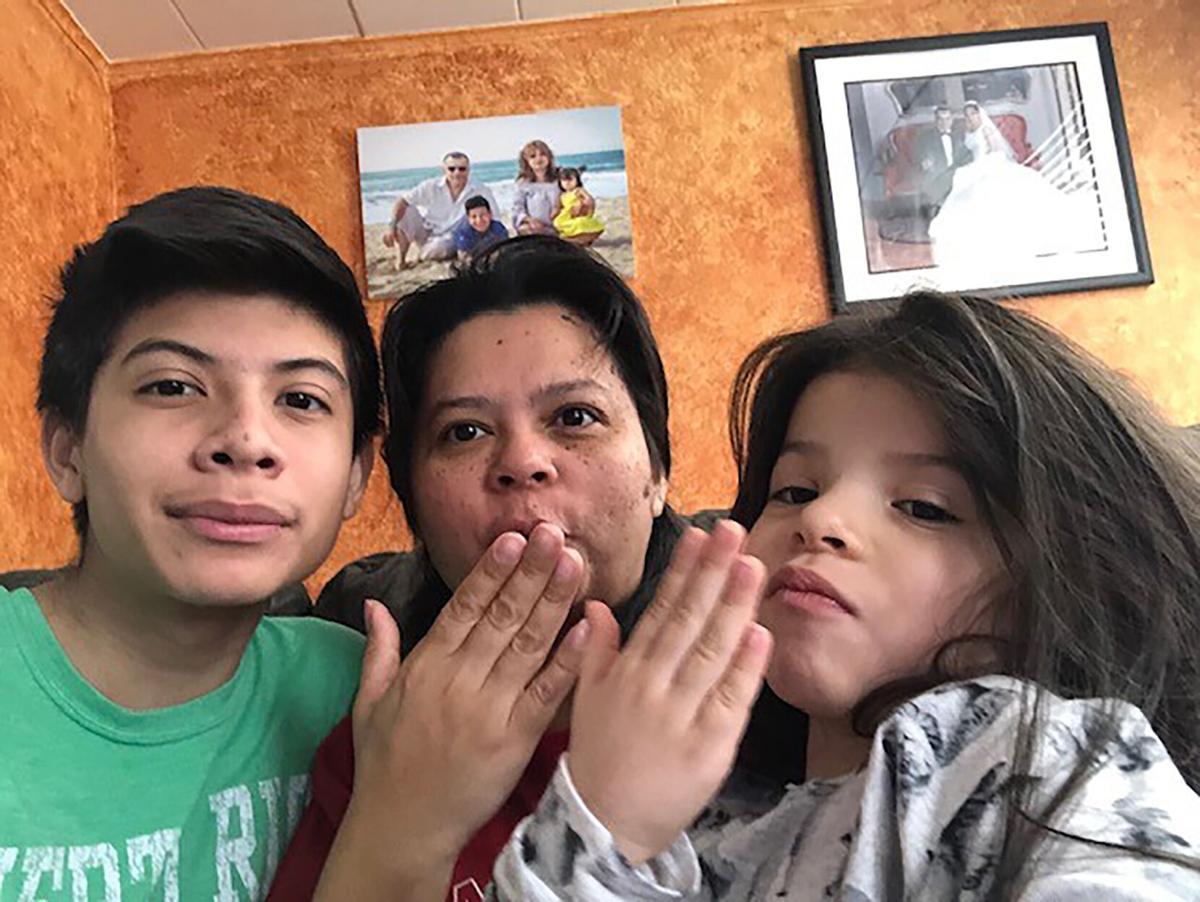 Son, wife, and daughter of Ricardo Ramirez sending him wishes virtually during his hospitalization. 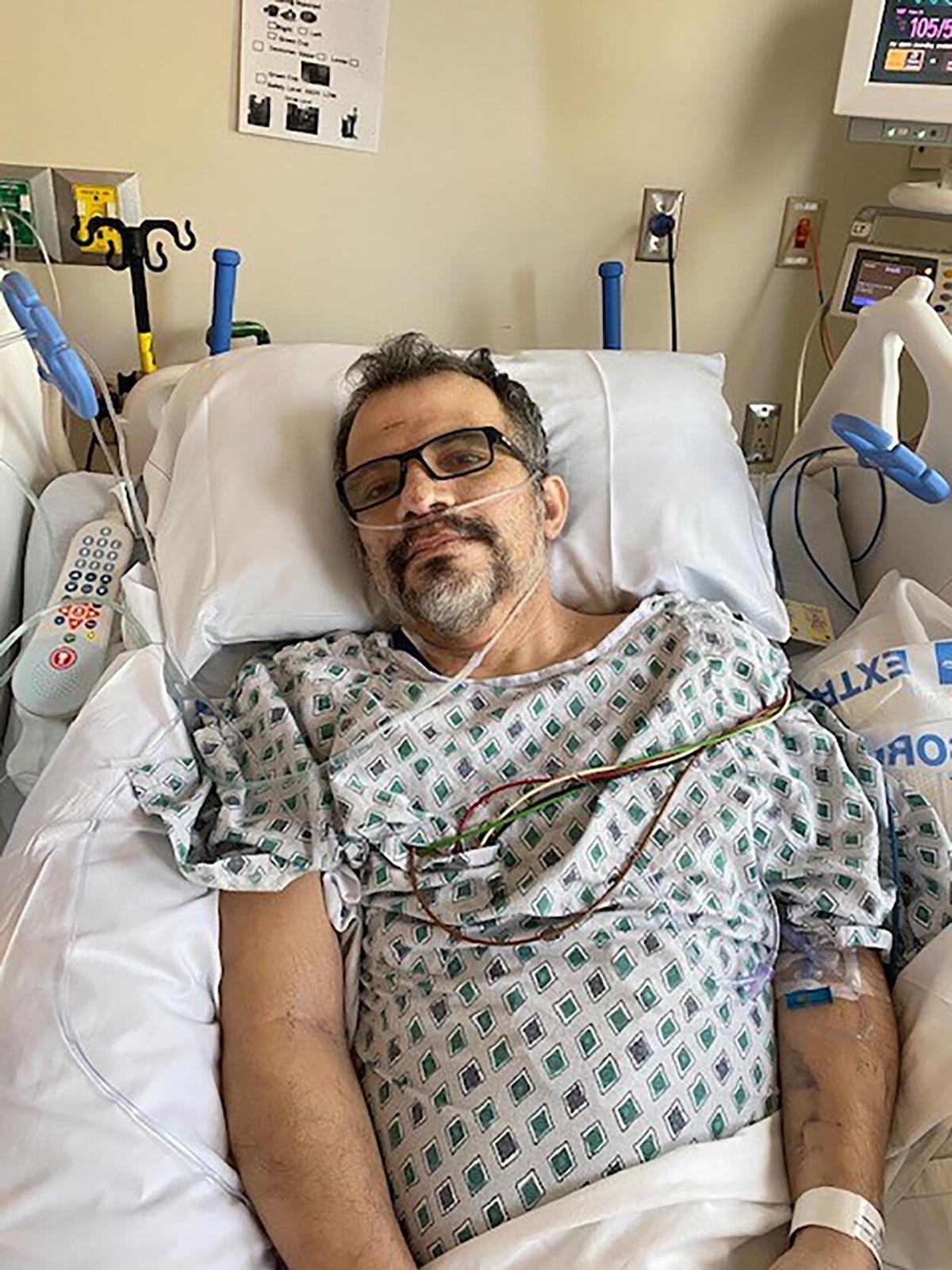 Ricardo Ramirez, 55, spent nine weeks at St. Charles Hospital in New York City and felt that death was only moments away.

Son, wife, and daughter of Ricardo Ramirez sending him wishes virtually during his hospitalization.

Ricardo Ramirez, 55, spent nine weeks at St. Charles Hospital in New York City and felt that death was only moments away.

At first, the thermometer read 101. But when Ricardo Ramirez arrived in the emergency department it just kept rising. He began pleading for his life, begging the fully gowned, gloved, and masked strangers to give him something to stop the fever.

"I started calling my family -- my wife and my kids." Ramirez has two children, Ricardo Jr., 14, and Rachelle, five. "I started giving my son all my passwords and all my personal information for him to have if anything happened to me," he told CNN.

"I am in the hospital and you are at home," he told his son. "You are the man of the house."

Ramirez, is a 55-year-old biomedical technician at St. Charles Hospital in Port Jefferson, on New York's Long Island. And at that moment, he was living through the trauma that so many Covid-19 patients experienced: the feeling that death was only moments away.

It wasn't. He returned to his family after nine harrowing weeks in the hospital. But almost a year later, he can still recall the trauma of his hospitalization vividly.

"I remember once I woke up and I said, 'God, I don't want to go.' I looked at the ceiling in my room and I saw my wife's face crying. And my kids, both of them crying behind her. Then I woke up and I was crying by myself," he told CNN in a phone interview.

Millions have survived Covid-19 hospitalization, and, for most, the acute physical symptoms have gone away. But many continue to endure the emotional and psychological trauma that comes with having Covid-19. A study published February 2021 found that 30% of Covid-19 survivors experienced post-traumatic stress disorder, or PTSD, a psychological illness that usually occurs after someone has a life-threatening experience.

If left untreated, PTSD has the potential to turn a hopeful recovery into a living nightmare. And while studies after SARS epidemic in 2003-2004 found similar rates of PTSD at around 25%, the scale of the Covid-19 pandemic is a key difference. With roughly 30 million confirmed infections in the US since the start of the pandemic, some experts say the world should be bracing for a mental health crisis.

PTSD is a mental health disorder in which a person experiences thoughts, flashbacks and nightmares that strike unpredictably, and bring the person back to the moment of trauma. The re-experiencing of memories causes panic attacks and trouble sleeping.

"It may occur in patients who experienced a traumatic event," Dr. Delfina Janiri, who helped a single-center study published February 2021 in the Journal of the American Medical Association Psychiatry and psychiatrist at Policlinicio Universitario Fondazione Agostino Gemelli in Italy, told CNN. "So in this case we consider having experienced a severe and acute Covid illness."

Janiri's study included 381 patients treated at a hospital in Rome, Italy between April and October of 2020. After recovery from infection, all patients were referred to a post-recovery care center where they received a full psychiatric evaluation.

The patients were evaluated for anxiety, depression, mood disorders and PTSD. "We were surprised by the fact that most of the symptoms we found clustered around the PTSD syndrome," Janiri told CNN.

They also looked for patient characteristics that increased the risk of developing PTSD. The strongest predictor was persistence of three or more Covid-19 symptoms, the same symptoms described by long-Covid patients: fatigue, brain fog, heart palpitations, difficulty breathing, headaches, and others.

Around 70% of people who reported experiencing three or more persistent medical symptoms were found to have PTSD compared to 31% for people with one or two, the study found.

"We found a strong association between the post traumatic stress disorder and those symptoms," Janiri said. "Of course, it's not possible for us now to define the directionality, which means we don't know which was the first thing, so the thing causing the effect. But for sure the people reporting more persistent clinical symptoms are also people reporting more PTSD symptoms."

An earlier study out of China that involved 714 hospitalized patients at five hospitals in Wuhan in March 2020, and published in Psychological Medicine, found 96% of people surveyed had post-Covid PTSD. Half of the patients surveyed said that online mental health counseling would be helpful.

Haunted by the ICU

PTSD occurring after certain hospitalizations is not a new phenomenon, said Dr. Ronald Brenner, psychiatrist and Catholic Health's Chairman of Behavioral Health. As some research suggests one in five patients experiences PTSD after ICU admission.

"But in Covid, it is also showing up in people who had moderate to severe Covid without having to go to the ICU," Brenner said. Why this is the case is hard to know, Brenner said, but it could be due to the high death rate associated with Covid-19.

Brenner is seeing the after-effects of the virus firsthand as a psychiatrist. One patient of his was hospitalized for five days with Covid-19, but never required ICU level care. Now, any cough, pain, or other symptom triggers anxiety and sometimes panic attacks.

"He started having real anxiety attacks about having Covid again, about the symptoms not going away, having residual Covid forever," Brenner said. "He then also had great difficulty coming back to work because of the avoidance issue, because of the fear of going to the same place."

PTSD causes people to avoid situations associated with the trauma, as they can trigger panic and anxiety. The patient still has difficulty at work, Brenner said.

While encouraged that some patients have come forward, Brenner says a comprehensive strategy is still needed to ensure all patients get the care they need. And there is treatment that works, Brenner said, such as cognitive behavioral therapy or treatment with medicine such as antidepressants or anti-anxiety medications.

The National Institute of Mental Health is currently funding research to better understand post-Covid PTSD, said Dr. Susan Borja, psychiatrist who heads a program for studying traumatic stress at NIMH. For example, the newly funded National Institutes of Health studies looking at long-Covid patients will also include analysis on mental illness in these patients.

"One of the challenges of this pandemic, is how widespread it is," Borja told CNN. "When it comes down to the entire US population with a healthcare system that's already somewhat at capacity, there's a lot of people that are suffering from mental illness and never received any care."

A key strategy to reach people with post-Covid PTSD must be outreach and targeted screening, Borja said. An example that could be adapted to other high-risk groups is the Heroes Health Initiative, which was launched in June 2020 by the Institute for Trauma and Recovery, University of North Carolina, Chapel Hill, funded by the Rockefeller Foundation.

The initiative uses a free app, the Heroes Health app, that offers health care workers a weekly survey that screens for mental health symptoms and connects users with a mental health worker if needed.

"In this way, the program has linked up hundreds of health care workers to support and care," Dr. Sam McLean, director of the institute, told CNN.

Using screening measures like this for groups that have been identified as higher risk, such as those with persistent Covid-19 symptoms, could be a key strategy to get ahead of this looming mental health crisis.

"The sooner you can get people connected to care and get them good evidence-based care, the faster you're preventing a lifetime of suffering that has all kinds of consequences for the person," Borja said.

And it's important we address this problem now, because, due to stigma, the number of Covid-19 survivors with PTSD could be much greater than people think, Brenner said.

"They have fear of being labeled. I think it is a brand new constellation of symptoms for them that they are totally scared about and totally ashamed about in way. I think it's much harder for them to accept that there is a psychological component to this and not just a physical component."

Correction: This story is updated to show that St. Charles Hospital is in Port Jefferson, NY, on Long Island