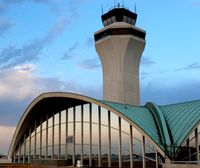 ST. LOUIS (AP) - A severe storm in the St. Louis area is forcing Lambert Airport to temporarily halt all flights.

The storm rolled into the region Tuesday evening. Funnel clouds were reported in St. Charles County, but there were no immediate reports of major damage.

Lambert officials say the Federal Aviation Administration stopped all arrivals and departures around 6:30 p.m. due to the extreme weather.

The storm was part of a system that began Monday in the Plains. Around three dozen tornadoes have been reported since Monday night.