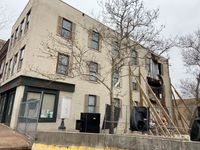 JEFFERSON CITY - Property owners of two buildings in the heart of Jefferson City are facing a deadline to either repair or demolish before the city steps in to begin the process itself.

In October, Jefferson City Counselor Ryan Moehlman notified the owners of 200 and 202 E. High Street “to fully and finally collaborate to determine if a private resolution to the situation is achievable.”

Matt Green is the owner of Bar Vino at 204 E. High Street and shares a wall with the crumbling buildings. He’s met with the owners and said such negotiations are difficult.

“It’s really complicated how the walls of the buildings are all shared, legally,” Green said. “It’s all very old agreements tied to the titles or the deeds of the property. Nobody wants to be stuck with the bill, including me.”

The two buildings share a common wall. According to previous KOMU reporting, the owner of the 200 building, Neidert Properties LLC, owned the shared wall and could proceed with demolition. However, Green said “nothing has changed” in over a year.

“I think a lot of people want the downtown area to look nice and be pretty,” he said. “And it’s pretty tough when there’s a crumbling building right in the second most popular intersection in town.”

Both buildings were issued a dangerous building code, and the order was upheld by the Cole County Circuit Court on June 6, 2019. Moehlman’s letter said if "meaningful on-site work to repair or demolish" 202 E. High has not commenced by December 9, 2019 then the city would begin the demolition process on Dec. 10th.

The city council approved the use of $300,000 for the demolition during a Dec. 2nd meeting. Jefferson City Mayor Carrie Tergin said they have not settled on a demolition contract.

Matthew Doyen is a Jefferson City resident and employee at High Street Bakery. He said the current supports on the building are dangerous, and he hopes they come down soon.

“Those are toothpicks,” he said. “It’s not going to do any good for us.”

KOMU reached out to the attorneys for both properties but did not hear back.