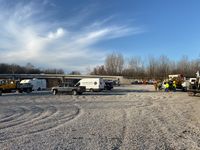 Teams are searching for the body at the Lamine River in Cooper County. Multiple Columbia and state units assembled on Tuesday, as well as a dive team. They did not have luck in finding Ji.

Columbia Police Department PIO Jeff Pitts reiterated the logistical issues that have come up during the search. Those difficulties include equipment access, water temperature, low visibility in the water and a build-up of debris in the river.

A group of people who live in Columbia are passionate about finding Ji and are taking some matters into their own hands.

Some of them are friends of Ji's, but most of them have never even met her. They are working together, sharing information on a Facebook page called Spread Awareness Now.

One group member, who wishes to remain anonymous, said she will get a group together to search if police "do not come up with anything significant this week," she says.

Ji was reported missing on Oct. 10 by her husband, Joseph Elledge. According to a probable cause statement, he is the subject of the investigation into her disappearance.

Elledge is also charged with child abuse and neglect. He’s currently being held in the Boone County jail on a $500,000 bond.

Investigators said prior to his wife missing, Elledge drove around several mid-Misssouri towns for hours, including several rural areas. Elledge told police he did not look for his wife after she disappeared.

According to Pitts, the crews brought in a grappling hook on Tuesday. Once the hook clears away debris, searchers can better reach the bottom of the river.

"Every day the divers go in - with as cold as it has been - has always been a concern for the divers and their safety," he said.

Pitts said they will reevaluate the search efforts on a day-to-day basis, giving no indication when they might resume.

Callaway County Sheriff has one in custody in murder investigation Posted on 24 January 2020 at 6:41pm

Missouri prisons paring back as prison population drops Posted on 24 January 2020 at 7:47pm