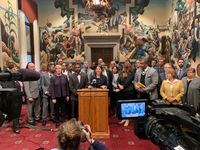 Democrats held a news conference in the house lounge immediately following the speech.

"Governor Parson tried to create the impression that he had become a unifying leader we had hoped he would be, but after 18 months Missourians know exactly what to expect from our accidental governor- it is that he will not put their interests first," said house minority leader Crystal Quade of Springfield.

Some of the things he talked about at the news conference were gun violence, the economic state of Missouri, and healthcare.

"I will not accept that children being kicked off their healthcare is cost saving...it is a shame that our administration is talking about a lot of children who have lost their healthcare coverage who we know qualify for it," said Quade.

Quade said that they will continue to investigate why kids are not getting the Medicaid coverage they do in fact qualify for.

"Missourians saw a lot of folks who were expecting to get money back, but actually ended up owing more," said Quade.

When asked about what Democrats thought about the proposals, Quade said they have not seen proposals that are showing any change regarding gun violence across the state of Missouri.

City of Columbia prepares for possible snow and slickness Posted on 25 February 2020 at 5:54pm

Bill requires parents be notified about sexual orientation discussion in schools Posted on 25 February 2020 at 4:25pm

Emergency crews respond to numerous crashes on slick roads Posted on 26 February 2020 at 8:50am