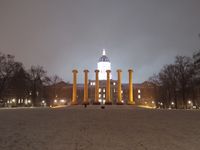 COLUMBIA - Officials with University of Missouri announced campus is closed Friday due to weather. The university earlier announced a delayed start but updated it to a full closure later in the morning.

Numerous other school districts across mid-Missouri decided to close Friday as well, including Columbia and Jefferson City.

How hot weather could be affecting your mental health Posted on 2 April 2020 at 1:00pm