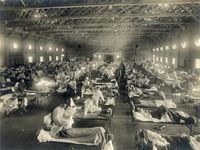 COLUMBIA – Before COVID-19 was even on the world’s radar, MU School of Health Professions associate professor Carolyn Orbann had been studying how human behavior played a role in the 1918 pandemic.

“I’m very interested in humans and their culture and how their culture influences the way they interact with each other," Orbann said. “I started working with someone in the department of anthropology who was studying the 1918 flu pretty extensively.”

When COVID-19 emerged as a global pandemic on the same scale as the 1918 pandemic, Orbann started to notice some similarities.

“Massive movements of population really played a role,” she said.

For COVID-19, things like cars and commercial air travel are major factors for transporting the virus to new places. But in 1918, those things were in their infancy, yet the flu was able to spread around the world in the same fashion. There’s one big reason for that.

“In the 1918 pandemic, you had this big global stage of World War I,” she said. “The circulation that was happening as the war was winding down, you had all these multinational people who and been in Europe fighting, who were now going home.”

In her study of the 1918 pandemic’s effects in Missouri, Orbann found it spread across the state in a similar pattern as COVID-19 is spreading now.

While it hit rural areas later, it also hit them harder.

“One of the things that happened in rural Missouri is that a lot of the medical professionals actually left to help with the war effort,” she said.

Orbann said her study found people in rural areas in 1918 often felt more of a sense of patriotism and duty to serve their country as compared to people living in bigger cities like Kansas City and St. Louis.

Soon, Orbann will put her knowledge of the 1918 pandemic’s spread in Missouri to use in the COVID-19 fight.

Even though a global war didn’t bring on COVID-19, the virus didn’t need one in order to spread as quick as at has.

“It’s the same pattern—in our time now it’s just so sped up that you have to really jump on the mitigation much faster,” Orbann said. “You just don’t have as much time to plan because everything happens so much more quickly.”

She said her knowledge of the 1918 pandemic may have played a role in her preparedness for COVID-19.

“Having read some of the manuscripts and letters and all the historical stuff from the flu here, maybe I was a little more mentally prepared for these weeks and weeks of home quarantine,” Orbann said.

EXCLUSIVE: Woman hit by car at Columbia protest speaks out Posted on 2 June 2020 at 10:44pm

Columbia officers take a knee with protestors downtown Posted on 2 June 2020 at 10:34pm