State rep gives flags to business owner after someone burned his 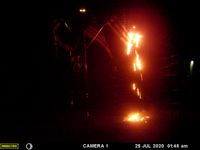 "This is just pure hate, destruction of property and vandalism," he said on Sunday.

Brummet said he put up the campaign sign as a thank you to the current administration for small businesses loans during the pandemic.

"Two months ago, we received our PPP money," he said. "It kept us up and running. It kept our business open, and until today we haven't had to layoff one employee."

After people vandalized the sign, Brummet said he set up a camera that later caught video of someone spraying flammables on the flag stand and then setting one of the four American flags on fire.

Brummet said he hopes people can have an open dialogue about why they disagree with each other instead of damaging property.

He said he's made multiple reports to the sheriff's office about the vandalism.

He said Rep. Sara Walsh, R-Ashland, brought him a new Trump campaign sign, along with American and Missouri flags.

Rep. Walsh posted pictures of Brummet holding the new signs and flags to her Facebook page on Saturday, and said she has zero tolerance for the burning of the American flag and vandalism on private property.

KOMU 8 reached out to Rep. Walsh for a comment Sunday evening, but haven't heard back from her.

FRIDAY: Missouri gubernatorial candidates to debate on Sept. 25 Posted on 22 September 2020 at 12:15pm