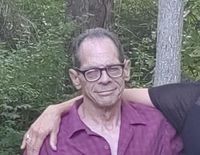 COLUMBIA - 58-year-old Columbia resident Clayton Jacobs has been reported missing after he was last seen by his neighbors on Saturday, July 25 leaving his apartment on E Forest Avenue.

Jacobs was described as leaving distraught as he drove away on his white Honda Moped with a red seat. Jacobs left without any personal belongings including his wallet and phone.

Walker said her father suffers with some mental illnesses which could have been the reason that he left the house distressed.

"He loved driving back roads in Southern Boone County by the river and out in Ashland," Walker said. "So maybe he went for a drive and then had an accident, is where my mind is at right now."

Walker also said that Jacobs' neighbors were the only people who would have had contact with him that night.

"I don't even think it's fully hit me yet, I feel like I'm kinda in a bad dream," Walker said when asked how she's feeling.

Anyone with information regarding the disappearance of Jacobs should immediately contact the Columbia Police Department.

CPS working with local after school dates with concerns over later start date Posted on 13 August 2020 at 11:18am