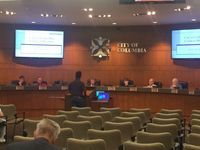 The Columbia City Council meeting was heated Monday night after members of the group spoke about issues on racial profiling.

A KOMU 8 reporter witnessed the event unfold said that members of the group were angered by Burton's response to and interpretation of the police survey released Monday afternoon. Members began cursing at Burton and stormed out into the entryway of the building.

Once in the entryway, members began to circle up and continued to express their dislike of Burton. During some point in the meeting, members left and returned expressing their grievances again to the council.

Council members responded to group members and said they have to work together and communicate effectively rather than continuing to walk away from each other.

Speaker Traci Wilson-Kleekamp said, "We need to change our philosophy about policing so that it is about peace, not about managing bodies."

After all four speakers voiced their opinion, Burton shared his thoughts towards race issues in the community. Burton said, "I am sensitive to the fact that people may be believed they have been profiled, and maybe they actually have been."

Burton said that he has looked into all of the collected police data and said, "we don't have a racial profiling problem in Columbia."

Boonville man pleads guilty to child molestation, given 5 years probation Posted on 6 August 2020 at 9:32am

Teenager killed, another injured in Mexico shooting Posted on 6 August 2020 at 9:12am