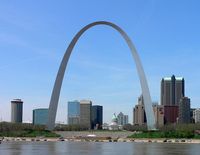 Judge Steven Ohmer on Thursday lifted an injunction that previously blocked a 2015 ordinance from becoming law. St. Louis' minimum wage will rise again in January, to $11 per hour.

The city says it is mailing notices to employers. Those who refuse to pay workers the new minimum could face criminal prosecution and loss of their business license and occupancy permit.

St. Louis joins about 40 other cities that have raised their minimum wage, including Seattle, Los Angeles and Chicago. It doesn't go as high as the $15 wage being phased in for some places, but it is significantly higher than Missouri's $7.70 minimum.

It hasn't always been easy to raise the minimum wage in Missouri. In 2015, St. Louis tried to raise its wage, only to be struck down by the governor