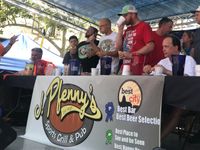 The winner, Brandon Clark, wanted to eat 25 dogs, two more than last year, but he shattered his personal record by ten.

Clark has competed in dozens of contests since he started as a competitive eater about a year and a half ago.

To prepare to eat all that food, Clark fasts and drinks a lot of fluids. For Wednesday's competition he stopped eating at 11 a.m. on Tuesday.

"A lot of people don't even drink one gallon of water a day," said Clark. "I usually drink at least four gallons."

"About 90 percent of my diet consists of salad and yogurt," he said.

"A lot of it is getting past the mental barriers. I have to keep telling myself to swallow," Webb said.

He said the critical point in any hot dog eating competition is around the eight to nine hot dog mark, which usually happens about five minutes into the contest.

"You'll find that even college guys that can eat a lot will start to feel it around eight or nine," said Webb. "That's when it really adds up and that determines whether you will keep eating or not."

While Clark eats a lot, he has actually lost weight since he started eating competitively. He says his weight still fluctuates though when he goes on trips to multiple competitions.

"When I go compete, I gain anywhere from five to 20 pounds," he said.

Another competitor, David Stock, entered the hot dog eating contest on a whim. He was walking past the stage when he heard the emcee say one more male was needed.

"The competition was much harder than I thought I would be," he said. "My advice to other people who want to compete would be to not eat an entire bowl of ice cream before. I know from experience."

Stock ended up eating nine hot dogs in the 10 minutes of the contest.

The contest is held every year at the Salute to America festival.

Columbia City Council to vote on mandatory face mask order Posted on 6 July 2020 at 7:21am