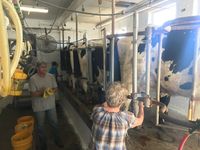 PECULIAR - Fourth generation dairy farmer Jay Fogle is one of many Missouri milk cow operators who are struggling to stay afloat.

"It just seems it's harder and harder to make a living doing this," Fogle said. "I love it, it's all I've ever did."

He owns Fogle Farm in Peculiar, Missouri, where he lives with his wife, sons and his parents.

Milk prices were falling in 2009, so the family had to think of ways to diversify, Jay Fogle said.

He said milking cows is all he'd prefer to do, but his "current milk prices are well under what they consider break even."

Fogle Farm started a certified bakery to sell fresh baked goods at a local farmer's market. The operation began growing hay to reduce feed costs. The family also has a beef herd, to add to their income, all to try and make ends meet.

"Even the very large dairies, it's not that they're making money right now either, it's not profitable for anybody," Jay Fogle said.

The money in milk

While Missouri is not one of the top ten milking states in the county, it still provides economic value. In 2016, the dairy industry provided 1,985 jobs and generated $228.5 million in milk cash receipts, according to a University of Missouri Extension Dairy Snapshot, which quotes the USDA.

The figures are relatively low compared to those facing previous generations of farmers.

"When I got out of high school, being a dairy farmer was a pretty good deal," Jay Fogle said.

No more Got Milk? Instead, where'd the milk go?

She said she remembers a time when there were 20 to 30 "dairies" in Cass county.

"They had a Dairy queen, or princess. It was a whole festival weekend where the dairy farmers, you know, it was recognized the significance that dairy farmers had," she said.

Now, Missouri is milk deficit, meaning the state does not produce the amount of milk necessary to meet its own needs.

To calculate the deficit, multiply Missouri's estimated population, which was 6.1 million people last year, by per capita milk consumption of 643 pounds of dairy. That would mean Missouri would need to produce 3.9 million pounds of dairy for for its population that year.. According to the USDA, Missouri only produced less than a third of that.

But milk farmers like Jay Fogle, don't have a say where their milk goes. Fogle Farm is part of a milk co-op that distributes the milk. Fogle Farm's product goes to a processing plant in Arkansas, even though there's another plant 30 minutes from the family's operation.

Jay Fogle's idea to change that would be to start a Missouri association milk brand.

"It really wouldn't cost Missourians any more money," he said. "But the Missouri dairy farmer could get more of that drinking milk price, fluid milk price."

The United States collectively isn't drinking as much milk, according to the USDA.

People across the nation consumed 247 pounds per person of fluid milk in 1975. Last year, the amount consumed was about half of that.

"The dairy farmers, I mean where would you be without the dairy products," Janis Fogle said. "It has its own food group!"

Even the number of cows has drastically gone down.

While in a rocky financial state, the Fogles rely on their love of the business to push them forward.

"So yeah, I mean, if you aren't hopeful, there's no reason to keep doing it," Jay Fogle said. "Me and my hope might be not well-founded, but I guess I have it."

Janis Fogle teared up thinking about the possibility of having her grandsons continuing the family business.

"They're the fifth generation. We would love to be able to see the farm as a whole keep on keeping on," she said. "But how do you do it?"

(Editor's note: This story is a Missouri School of Journalism collaboration. For more on this topic read The Missourian's "Evaporating: Missouri’s dairy industry at a crossroads" and "Evaporating: Where does your milk come from?".)