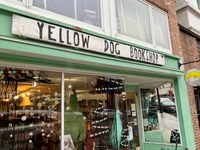 COLUMBIA - When Friday’s weather forecast was announced, many businesses decided to adjust their hours.

Joe Chevalier, owner of Yellow Dog Bookshop, posted on Yellow Dog’s facebook page that he would be closing the store at noon. He said he wasn’t sure how bad the snow would be, but didn’t want to risk his safety.

“A couple times in the past I stayed a little too late and had trouble on the ice. I’m hoping today won’t be icy and just snow, but even then it’s probably safer to go home, and at a certain point no one is going to be out walking around downtown anyway,” he said.

Chevalier also said he was disappointed that it would be snowing through the weekend since that’s when Yellow Dog makes most of its profits.

“Friday and Saturday are usually our two best days of the week, and this will cut down business pretty sharply. But that’s usually our winter here,” he said.

Lakota Coffee Company is also adjusting its hours. Instead of 11 PM, Lakota will close at 6 PM. Andrew DuCharme, Lakota’s general manager, said they’ve dealt with storms before and tried to stay open, but “even an inch of snow can just cut [their] business in half.”

“In reality, I’d rather sacrifice a little money for the safety of the employees,” he said.

Juliette Baker, a Mizzou student, stopped by Lakota before going back home.

She works at a lab on campus where it’s her job to feed the animals. She said she was worried because there were only seven employees including herself, and that it might be hard to get to the lab.

Baker said it “sucked” that she would have to stay home all weekend because of the storm but tried to look on the bright side.

“I would rather be home and safe than go out and try to get somewhere and have something happen with the weather,” she said.

As of Friday, the storm looks like it will continue through Sunday.

Police officer working security at Walmart tried to stop a shoplifter, was shot multiple times Posted on 17 February 2020 at 3:42pm

Ashland police chief sues city and its mayor Posted on 17 February 2020 at 5:47pm

Man accused of shooting at Ashland police charged with attempted escape from jail Posted on 17 February 2020 at 11:28am