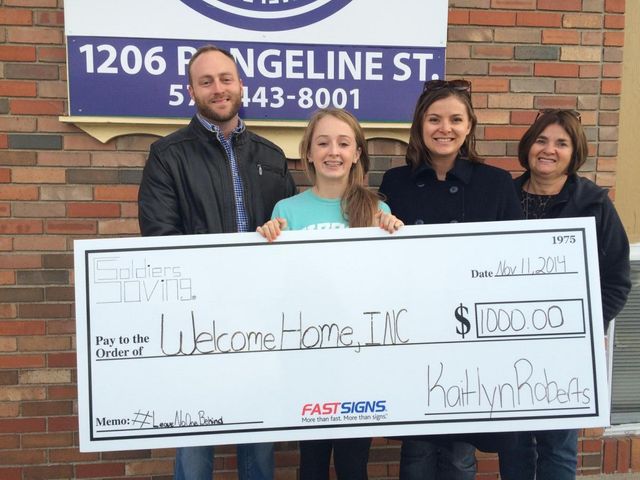 She raised the money through her startup company "Saving Soldiers," which she started last summer.

Welcome Home, Inc. also set a timetable for the start of its campaign to raise money for its "Community for Veterans." It will start the campaign in early December to help fund the costs of a campus for homeless veterans located on Business Loop 70.

Welcome Home, Inc. President Ross Bridges said new housing is necessary to meet the needs of a large number of veterans in the area.

"We're turning down roughly three veterans a week because we simply don't have the room for them," Bridges said. "It's devastating to know that there are that many homeless veterans out there."

Bridges said the recent conflicts in Afghanistan and Iraq have contributed to the high demand for veteran housing, but there are also other reasons.

"We've got the Vietnam population, and a lot of them are getting older," Bridges said. "A lot of them have been just fine and self-sustaining for years. Now, old age is starting to catch up with some of them."

The nonprofit organization announced a plan in April to partner with the Columbia Housing Authority to create both transitional living and permanent housing for homeless veterans.

The transitional shelter will have 29 beds, almost triple the amount the existing building houses.

Bridges said the organization will have collected roughly 63 percent of the funding needed, mostly from grants, by the start of the capital campaign. The project will cost roughly $8.5 million.

"We're looking to the community to not only raise money, but to raise awareness of the issue of homeless veterans in our Boone County community and state-wide," Bridges said.

According to the US Interagency Council on homelessness, there were 843 homeless veterans in Missouri in 2013.

Bridges hopes construction in the community will begin by the start of the new year.