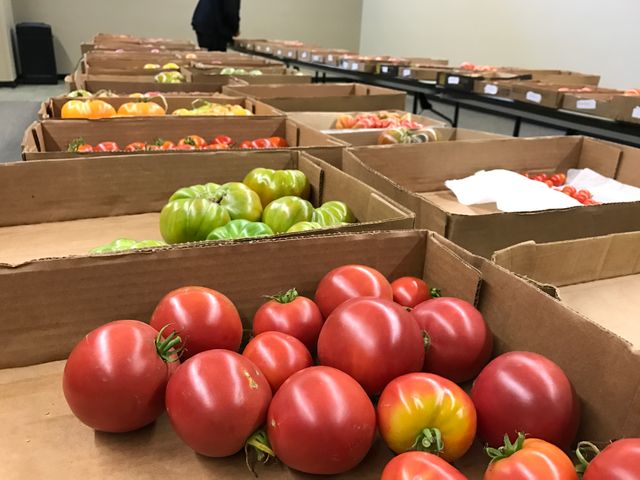 COLUMBIA - For the 13th year in a row, tomato and pepper lovers from across mid-Missouri will gather for Bradford Research Center’s Tomato Festival Thursday.

The festival that began with only 30 plants now invites visitors to try 144 kinds of tomatoes and 72 types of peppers, all grown on site and from commercial seeds.

All of the food will be labeled such that visitors can find their favorites in stores.

Superintendent of Bradford Research Center Andrew Biggs said visitors will notice a difference in taste from what is typically available in store as the research farm produce is meant to be eaten right away opposed to having a shelf life.

"They shouldn't bounce. Tomatoes are not supposed to bounce. They are supposed to be soft and delicious and the have the potential to have a very different consistancy than what we're used to eating from the grocery store. The reason we eat what we have at the grocery story is that those are transportable. All of the fruit out here. Once it's off the vine, it could potentially spoil in a few days."

Biggs explained the purpose of the festival is to display a variety of tomatoes and peppers and to interact with the community.

"This festival is all about showcasing the diversity found in nature and in this case, tomatoes and peppers." He said, "In most cases people are aware of bell peppers and jalapenos, maybe they've heard of a ghost pepper and then tomatoes well, they're red. And that's as far as it goes for most people but there's a lot more to it than that."

Based on pre-registration and past attendance, organizers are expecting up to 1,000 visitors within the three hour festival.

Visitors will have the opportunity to score everything they try on a scale of one to five. Results from the voting will appear on the center's website.

Volunteers from across mid-Missouri helped pick, clean and cut the peppers for the festival Wednesday. One volunteer from Jamestown, Jesse Emmons, has helped with the festival for more than six years.

"It gives me something to do with tomatoes again.”

During the festival, local restaurants including Carlito's Cabo, Broadway Brewery and El Jimador will showcase signature dishes that include tomatoes and peppers. This year the center is adding a $5 ticket raffle for a FS91R weed eater.

The center grows the world's hottest pepper, the Carolina Reaper, and will have a tent set up for those brave enough to try it with glasses of milk on hand to settle the spice. Biggs will offer 30 minute tours of the center's grounds including a look at the corn, soybeans, compost set up, saltwater shrimp, wildlife and pollinator habitat. There’s also set to be a kids corner with seven different flavors of Missouri milk for kids to taste.

The Bradford Research Center sits on 591 acres of land that is owned and operated by the University of Missouri. The center focuses on row crop research and is a research facility and outdoor classroom to students and faculty.