You have permission to edit this article.
Edit
WATCH NOW
Home
News
Weather
Sports
Traffic
What's On
KOMU 8 Cares
Contests
Share This
1 of 4 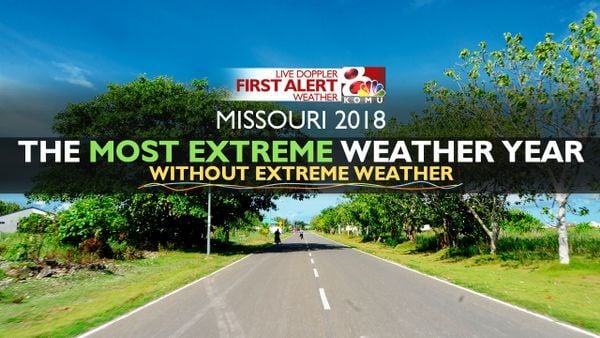 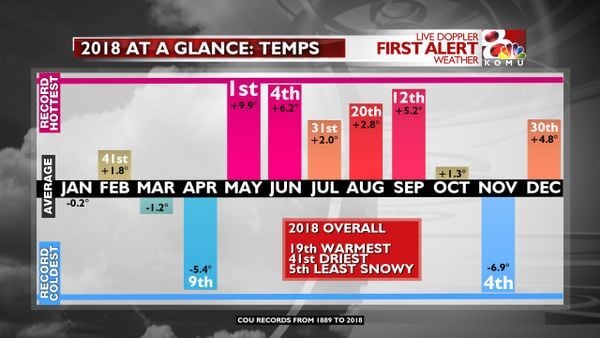 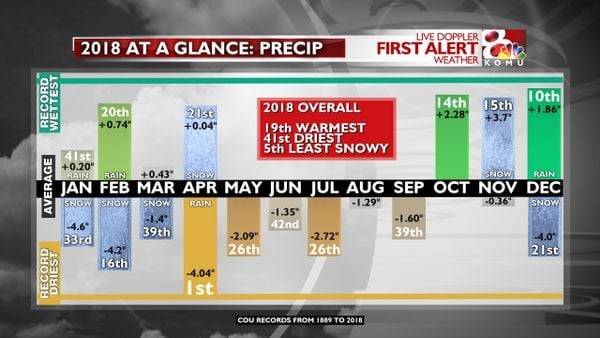 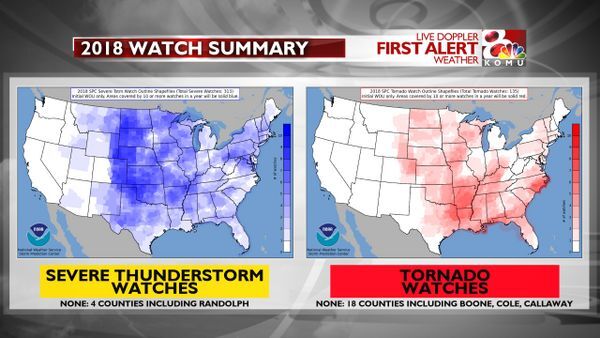 COLUMBIA – 2018 was a year for the weather record books. It was extreme, but not in the way you might think. Missouri didn't experience a major tornado or numerous severe thunderstorm events. There was snow on Easter and a blizzard in November, both of which are unusual, but other than that, it wasn't something to write home about. However, it was without a doubt one of the most extreme years of weather the state has ever experienced.

The year was not defined by major weather events. It was defined by large weather swings. Things weren't in place. There was a weak tornado in July in Camden county and a blizzard in November. Two of the most notable severe weather events of 2018. These events are more notable because of their timing within the year. Tornadoes in July aren't common in Missouri, nor are blizzards in November. But the fact that it was a little cooler in July and much colder in November allowed these events to occur.

Meanwhile, we went from the 9th coldest and 1st driest April to the hottest May and 4th hottest June. As I recapped these months in a story online I even mentioned that "Extreme weather patterns are beginning to define 2018, and the year is only halfway through."

Later, after a drought, November was the 4th coldest and 15th snowiest and that was followed by the 30th warmest December and 10th wettest, including a significant rain event to end the year. We literally skipped spring and had a very very short fall (maybe a week or two).

These swings are not normal. The extremes we had in 2018 are not supposed to be common. Yet, they are becoming a much more regular occurrence. I mention this because we are now getting so used to hearing "it was the hottest month..." or "it was the driest summer since..." or "flooding is overtaking..." that those phrases and stats might not even phase us anymore. They should. 2018 was a significant weather year for Missouri. It was an extreme weather year without much extreme weather.

Note: for the data below we will be using Columbia as a center-point for the region.

Here are some fast stats for the year, all of which you can see graphically in the image slider at the top of this story:

Our current 2018-2019 winter season is off to a slow start, though it arrived early in November.

What a way to ring in the new year!#HappyNewYear#mowxpic.twitter.com/UrYH2KiTNM

As cold as we started the year, we warmed up quickly. Do you remember January 21, 2018?

January didn’t see much snow, only 1.5”. It was the 33rd least snowy on record. However, it was average when looking at rainfall and overall temperatures.

While not necessarily a weather event, don't forget about the widespread flu outbreak that lasted well into the year.

February wasn’t too “weird” per se. We got enough freezing drizzle on the 11th and 12th for some great nature views.However, it was the 16th least snowy Feb. on record with only 0.5” recorded. Temperatures were too warm during most moisture events for snowfall. Two days reached into the 70s. As for rainfall, it ended as the 20th wettest on record thanks to an inch and a half that fell on Feb. 20th. Rainfall was three-quarters of an inch above average, topping off around 3”.

March started out nicely for folks attending the True/False Film Festor the Polar Plunge. Overall, the month was nearly seasonal, but actually more below average in temperatures than February was. Only one day reached into the 70s.

April was the driest ever recorded. However, it was cold. In fact it was the 9th coldest on record and the coldest since 1997. Therefore, even though we saw very little moisture, less than half an inch in fact, what we did see was able to fall as snow. Yep, for the first time in 21 yearsmid-Missouri experienced snow in April. April 1st and April 8th both recorded 0.3” at the Columbia Regional Airport. This made it the 21st snowiest April on record and the snowiest since 1997.

More snow on Friday and possibly on Sunday, too. Here's a look at previous years with snow in April. It's been 21 years! pic.twitter.com/e15nH38Nqb

It was also the coldest April since 1997 and the 9th coldest overall in 128 years of record keeping. When it came to liquid content (rain), it was the driest April ever recorded. Less than half an inch of rainfall fell during the 30-day month.

Can we all agree April was a throwaway? pic.twitter.com/4k9WyKkgWM

That was the first four months. Then May happened.

May was the hottest ever recorded…by a jaw-dropping 0.9 degrees. Columbia ended the month 10 degrees above average. Two records were broken in Columbia over Memorial Day weekend. May 27 and May 28 both beat out records from 2012 by reaching a maximum temperature of 94 each day; besting the “old” records by two and three degrees respectively.

Seriously though, summer is moving in early. pic.twitter.com/63RwL2bPSj

There were a few thunderstorm events to rollthrough. Fortunately, May did see more rainfall than April. It was still below average by just over 2 inches however, with only 2.89 inches in total rainfall accumulation.

Damage reported along this line of storms with 60 mph winds. Trees and tree limbs taking a bit of a beating.

Exit 175 westbound I-70 this afternoon as a severe storm rolled overhead. Quarter size hail and at least 60 mph winds here. Looks to have turned over a camper ATTACHED to a truck while it was moving. pic.twitter.com/ThzbvgElTW

June was the 4th hottest on record. Precipitation is a little more complicated to report. During the last week of June a strong thunderstorm system moved through mid-Missouri, bringing torrential downpours to part of the area. Some areas experienced more than four inches of rain in a single afternoon. Other areas did not. For Columbia, the National Weather Service has a weather station at the Columbia Regional Airport and uses that station for it's Columbia reporting. Therefore, the total precipitation reported for Columbia will be around an inch and a half lower than what the city itself actually received.

You know I love my weather data facts. Check it out:

It was the 4th hottest June on record for Columbia, MO. That pushes 2016 to #9 and 2012 to #15. And that is WITH a few spring-like days mixed in. If we hadn't went average or below when summer "began" it would have been the hottest on record...two months in a row. #mowxpic.twitter.com/XsO3T8tPn5

July was hot to start but ended on a cooler note thankfully. Still, it ended up being the 31st warmest July on record. It was the 26th driest with only 1.65” falling. The lack of rainfall and the excessive heat began to show on the drought monitor over northern Missouri with some areas experiencing conditions similar to 2012.

Do you remember the drought of 2012? Areas north of I-70 are experiencing a similar, if not worse, situation.

Though it is officially the hottest day of the year thus far, it didn't necessarily "feel" like it. Heat indices have certainly been higher than we hit today. Plus, we had wind gusts around 20 mph and passing shade clouds. pic.twitter.com/ZniHI6LQa2

It was the 12th warmest September on record, ending over 5 degrees above average. Only 2.27” of rainfall fell, nearly equal to accumulation in September 2012, making it the 39th driest on record. Meanwhile, the tropics kicked into gear in September.

There's a lot going on in the tropics. The beginning of September is the peak of hurricane season....and I think the tropics are just about maxed out...running out of ocean to cover with storms! pic.twitter.com/Oi5ppaCBmR

WOW. Look at this stat.

Rain came back into the picture in October, curbing the drought Missouri had been experiencing most of the year. It was the 14th wettest October on record with 5.59” of rainfall. It was the rainiest month of the year. 2.08” of that rainfall feel in a single day on October 7th, making it the wettest day of the year. We started the month rather warm, but in mid-October colder air spilled in, giving us our first freeze of the season. Columbia even broke a record low on October 16th by reaching 28-degrees. Because the month started warm and then ended cold, it evened out, and the month looks fairly average on paper.

A freeze warning is in effect until 9 AM Tuesday.

November was a cold, cold, snowy month. It was the 4th coldest on record and the 15th snowiest. We broke numerous daily temperature and snowfall records. We had a blizzard. We had a tornado warning in St. Louis. Missouri had a blizzard and a tornado warning at the same time…perhaps making it the most iconic weather day of the year, showcasing the extremes our state went through this year.

While having high temps in the 30s isn't too out of the ordinary for mid-November, seeing one-inch of snow on the ground is. Check out these stats! pic.twitter.com/aOiXxh7FjU

I went through the past 128 years to find how often we reach 28-degrees or lower for a daily high temperature (as we did today, Nov. 13, 2018).Turns out, today was the 7th earliest on record.

At this point I asked folks on Facebook if they were already tired of winter (at the beginning of December). 55% said they were.

Finally, December. It started cold but quickly rebounded and it ended up as the 30th hottest December on record as well as the 10th wettest thanks to record-breaking rainfall on New Year’s Eve, the second wettest day of the year with 2.06” falling in the 24-hour period. However, due to the warm weather, it ended up being the 21st least snowy December.

Meteorologist Tim Schmidt points out that until Dec. 31st 2018, 2" or more December rainfall events had only occurred in 9 of 4031 days dating to 1889, accounting for 0.22% of all December days (very rare). We had one on NYE and now three 2" events have occurred in just the last four years (2 events in Dec 2015). Rainfall events greater than 1” in Dec. occur around 1.5% of the time if you were wondering.

We broke a record today. The Columbia Regional Airport picked up 2.06" of rain today beating a record of 1.68" set back in 1984. #MidMoWx#MoWxpic.twitter.com/INoGYkz4a5

Are you wondering about 2019? Well, if you noticed, long range forecasting is becoming increasingly difficult due to these large swings in temperature and moisture. That's why you might here meteorologists say that a forecast beyond a week, and especially beyond two weeks, is not accurate. I will tell you at the end of 2017 no one forecasted the extreme year we experienced in 2018. But we were here with you through it all. Week by week. Month by month. And we will continue to be here with you, working every day to bring you the most accurate forecast, and explanation of that forecast, you can find.

I will say it does look like a more active year in terms of severe weather than 2018...but that won't be difficult to achieve.