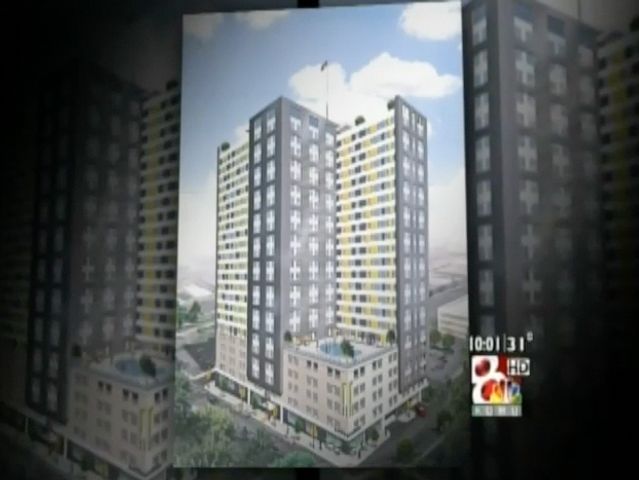 COLUMBIA - Picture a 24-story building looming over Francis Quadrangle at the MU campus.  That's just what some people are doing in response to a developer proposal to build such a structure at the corner of Sixth and Elm--and some don't like what they see.

Bob Knight, who graduated from Missouri in 1978, said, "A 24-story building is something way out of character for this neighborhood."

But not all oppose the concept. "I actually think it's a great idea", Katie Rapp, a student at the University of Missouri said. "I think Columbia needs to build vertically."

As soon as the city announced it was in discussions with New York-based development company Park 7 Group about a 24-story apartment building downtown, even the city's staff understood the implications.

"It is a building that is big, there's no question about that," Pat Zenner, Columbia's development services manager, said.

A graphic rendering of the building shows that the development company plans to put retail stores on the first floor of the apartment complex, with a pool overlooking Jesse Hall. The company also told the city unofficially it would include an underground parking garage designed to serve 50 percent of the building's residents.

Not much is known about the developer outside of the fact it is from New York, has developments in other college towns, and developed the Copper Beech student housing development in Columbia and other cities.

But the building is generating buzz because of its size, not its developer. The 24-story development would more than double the size of the Fifth and Walnut parking garage, which is currently the tallest building in downtown at 10 stories, edging out the Tiger Hotel by two feet. The new development would dwarf both structures.

The city's "Columbia Imagined" development plan, which it says includes "outreach to over 80,000 residents," lists as one of its goals, "The personality and character of neighborhoods should be preserved," and that to achieve that objective, the city should, "Provide incentives, tools, and protections to discourage contextually inappropriate redevelopment."

But the city says the proposed building is not out of context with where it would stand.

"I think it's a marvelous development because Columbia is either going to up or out and I'd rather see it go up," Fred Schmidt, Columbia's First Ward city councilman, said.

"The goal of Columbia Imagined was planned intensification of the densities and you don't do that without going vertically," Zenner said.

Schmidt says he's going to wait before he makes any final judgments.

"It's not really clear it's contextually inappropriate. Now I haven't seen the plan."

The property is zoned for C-2, which means there's no restriction on height, setback or parking. So the only way the city could stop the development is through a council vote for a moratorium.

"We could do that, but I'm not sure that would be a wise thing to do," Schmidt said.

But after saying he'd wait to look at the plans, Schmidt ended the interview with KOMU 8 News when asked what he would look for.

KOMU 8 News: "You say you want to look at the plans. What is the thing that you're looking for in the plans? Is it height? Is it parking? is it development on the bottom floors? Is it design? What is it to you?"

Schmidt: "Oh, we've already talked about a lot of that during this interview. I think at this point we're having a debate because I think you disagree with me, so I'm done."

Before ending the interview, Schmidt said he felt a moratorium might scare away other development. Earlier this year, when Sixth Ward Councilwoman Barbara Hoppe proposed a six-month moratorium on downtown demolitions to prevent the Niedermeyer building from being torn down for student housing, Schmidt voted in favor of the moratorium.

While the developer told the city it would build an underground parking garage for 50 percent of its proposed 700 residents, the city isn't sure that's enough.

Whether or not the 24-story development ends up being built, it certainly raises some questions about the future of downtown.