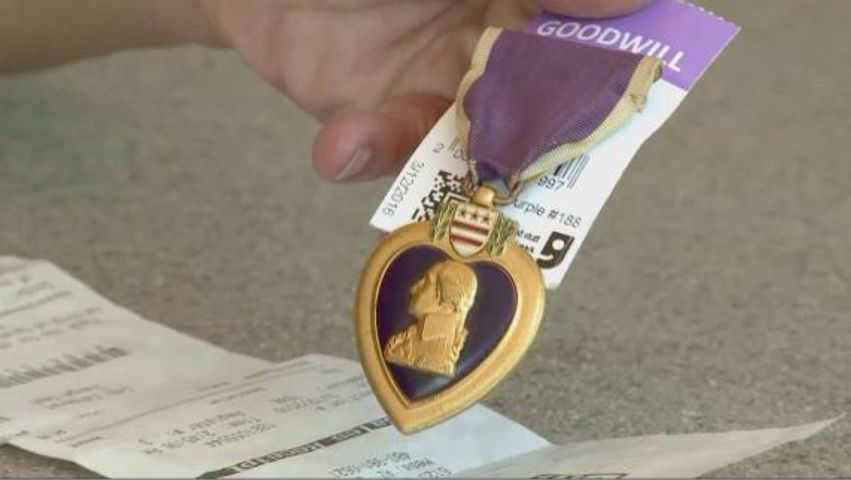 COLUMBIA - When Laura Hardy stumbled across a World War II Purple Heart medal last Saturday in an Arizona Goodwill, she had no idea where it came from or how it got there. But she knew it needed to go back to its original owner

Hardy told KOMU 8 she went to Facebook to spread the word about the award, which was priced at $4.99.

She posted a picture of the medal and the name on the back, Eual H. Whiteman. Hardy said she received more than 5,000 shares on her post overnight and was up to 8,000 the next day.

"I've always stayed away from Facebook, but I thought this was worth posting," Hardy said. "So many people reached out to help and it was Tina who finally solved the riddle."

Hardy said she received a call Tuesday morning from Tina Cook, who runs the Veteran Buddy Finder Facebook page that works to connect veterans. Cook told Hardy after doing some research she was able to track the medal back to Phyllis Lawson, a resident of Holts Summit, Missouri.

"I started working on it first thing in the morning and I found the connection, which is Phyllis," Cook said.

Cook said she started her research with a genealogy website to get basic information about Eual such as when he was born and where his parents lived.

"I also dug into newspapers.com and found his relatives' names and from there I found out he lived in Missouri," Cook said.

Lawson declined to an interview with KOMU 8.

Cook said Phyllis was excited about the find. She also said this is one of the most unique cases she has come across when trying to make connections between veterans.

"It's always nice when I am able to reunite veterans. Some haven't talked to each other for forty or fifty years," Cook said.

Hardy said she is going to ship the medal to Lawson Friday afternoon using priority mail.

"We're not letting it get lost again," Hardy said.