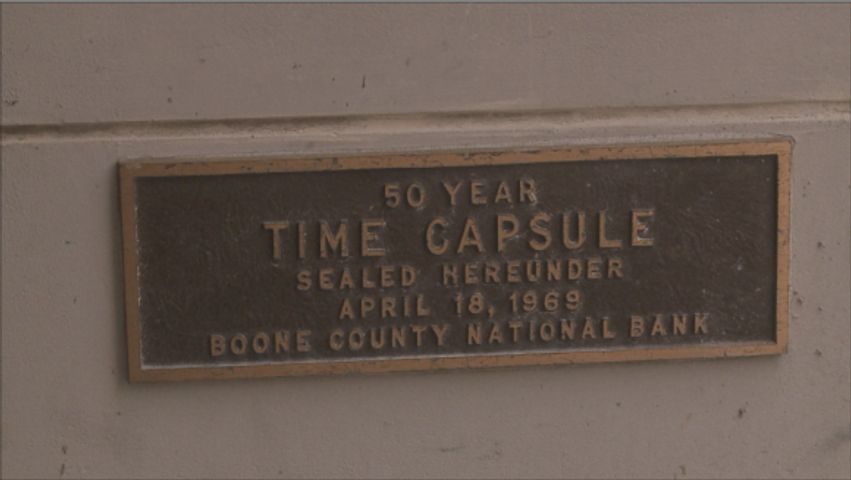 COLUMBIA - On April 18, 1969, Boone County National Bank filled a model rocket with things from the time period and sealed it under concrete. After a half-century of waiting and a name change, Central Bank of Boone County unveiled what was in the rocket Thursday afternoon.

The capsule sat under the 8th Street fountain for exactly fifty years before being removed. It comes straight out of the Cold War era. Three months after burying the capsule, man walked on the moon. According to an Internet database, gas was 35 cents per gallon.

Andrea Morrow, who works for Central Bank, said the most interesting artifact in the capsule to her will come from the youngest contributors.

"There are essays written by elementary school students at the time, predicting what 2019 would be compared to 1969. I'm interested to see how close they are to reality," she said. In 1969, the students wrote the essays as part of a competition to see who could make the best guesses about the future.

Clint Darr wrote an essay in 1969 and came back for more than seeing if he won.

"What's even more fun than seeing my essay that I wrote is seeing all the people. I see all these familiar faces from back in the day that I probably haven't seen a lot of since that day," he said. "To come back here and see all these people from the community from my childhood gathered here is just really fun."

The capsule contents also included more than a hundred essays, signatures of state and local officials who were in charge during the burial of the capsule - including Gov. Warren E. Hearnes - phonebooks, city maps and other bank artifacts.

Workers at the bank in 1969 wrote letters to family members who received them today.

Patty Thornton, Louise Folk and Jo Pummill said they had no clue their mom left them a note.

"This was a complete surprise to us, mom didn't say anything to us about it," they said. "It's nice to see her handwriting again."

"Reading the articles and seeing what was going on at Mizzou back at that time and other things in the community, new developments being planned and all that kind of stuff was fun to see," he said. "The road maps that were included, the phone book, things like that remind you of a different time."

Kevin Boggs won the essay award: he predicted the correct number of high schools and junior-high schools in Columbia. He also said food will only be heated in radiation ovens and cleaning will be done by automatic sweepers. Boggs won a $50 certificate of deposit untouched since 1969. That CD is now worth roughly $500.

The contents of the capsule will be on display in the Central Bank lobby from Thursday until June 30. Morrow said the things inside are pieces of history and she can't wait to unveil them.

"It's just neat to see all the things that were put in there. It's a great opportunity to come see a little bit of living history and what life was like 50 years ago," she said.

Central Bank plans to bury a new 50-year capsule in June, although according to Morrow, it won't look the same as the original on the outside.

"We had to figure out how to open it. It's been sealed for fifty years, and that could require a lot of different tools. They didn't leave instructions on how to open it," Morrow said.