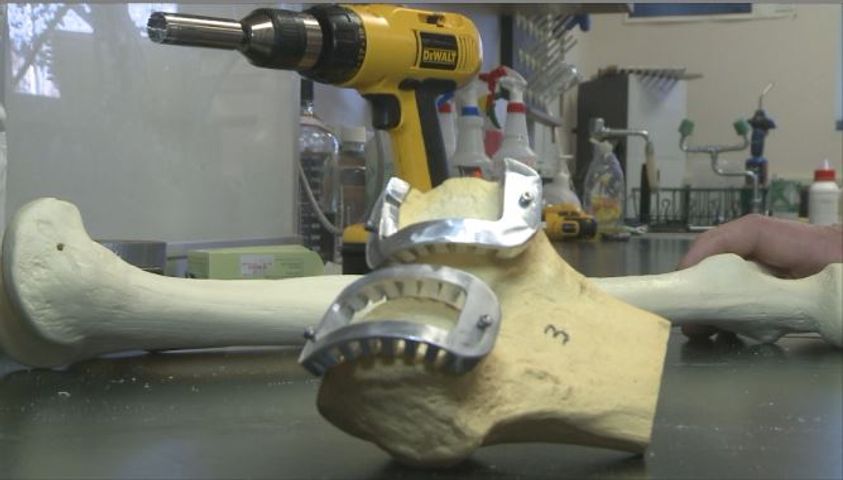 COLUMBIA - Researchers at the MU schools of medicine and engineering say new grants totalling $600,000 will open new avenues of exploration and potentially benefit many patients.

The money helps research teams launch projects from lab studies to health care innovations. Each team includes a faculty member from one of the two schools.

"It's a very close relationship on this project," MU Coulter Program Director Cynthia Helphingstine said. "Both parties are essential. You couldn't do this program without the other."

Funding for the research projects is provided by a $5 million partnership that began in 2012 between MU and the Wallace H. Coulter Foundation. The Coulter program pays for two-thirds of the $5 million total at about $3.33 million while MU pays for one-third at about $1.67 million. The partnership between MU and the Coulter Foundation runs until 2017.

"Translational research means taking something that is an interesting research idea and moving it from the bench in the laboratory into clinical use," Helphingstine said.

Helphingstine said the grants distributed geared more to MU faculty than toward the students.

"We get the faculty researchers, people that have understand all of these issues, and have spent their careers to solve problems," Helphingstine said. "This is finally the culmination of bringing a lot of that work together.

Jeff Hoelscher of the MU Health System said each of the six teams received about $100,000.

Dr. Ferris Pfeiffer is an assistant professor of orthopedic surgery in the MU Department of Bioengineering and Orthopedic Surgery. The Coulter program awarded Pfeiffer grant money for the second year in a row to improve success rates in cartilage transplants.

Pfeiffer works with Dr. James Stannard, the J. Vernon Luck Sr. Distinguished Professor in Orthopaedic Surgery and chair of the Department of Orthopaedic Surgery at the MU School of Medicine, to treat focal defects in knee and shoulder cartilage. He said his project typically deals with younger patients not ready for knee replacements.

"Our technique is to transplant fresh living, healthy articular cartilage from tissue donors into these patients and return them to full function," Pfeiffer said.

Pfeiffer said it is unlikely he would be able to work on his project without support from the Coulter Foundation.

"Certainly not at the pace we're able to do it," Pfeiffer said. "There are always obstacles to bringing any technology into commercialization. This one where we know will benefit patients greatly."

Helpingstine said the partnership with the Coulter Foundation is very prestigious for MU. MU is the only academic institution offering a Coulter Translational Program in Missouri and is one of 16 across the country.

After an extensive application and selection process during the summer of 2005, the Wallace H. Coulter Foundation announced in October of that year, the names of the nine Universities selected to receive the Coulter Translational Partnership Award in Biomedical Engineering in addition to the already existing program at Georgia Tech and Emory University.

This pioneering group is indicated with yellow markers on the map below and is known as TP1.

Based on the success of TP1, the Foundation announced the establishment of the TP2 Program. The six universities with blue markers in the map below are the latest recipients of the Coulter Translational Partnership Award in Biomedical Engineering.

"It's really been a great opportunity to improve the University of Missouri's ability to work with industry partners, and to ultimately benefit patients," Helphingstine said.

"The process is a little more rigorous than what a typical NIH (National Institutes of Health) grant," MU Assistant Program Director of the Coulter Program Clint Matthews said.

The process to get awarded funding from MU's includes the proposed project's principal investigator to submit a letter of intent. From there the MU Coulter Program selects which letters of intent they want full proposals.

"I kind of liken it to, the grant is not a huge grant, but it really allows you to shoot a small arrow, but a small arrow at a very defined target," Matthews said. "If you're doing that, you have a chance at having a success."

Each person who submits a proposal delivers an oral presentation as well.

Matthews said each year MU's Coulter Programs receives somewhere between 20 to 40 project proposals. In 2014 he said there were about 20.

Helphingstine said she hopes MU and the Coulter Program renew their partnership in 2017.

For more information on the six grants, click here.