A BRIGHTER TOMORROW: Mom's Breaking the Silence shattering the stigma around suicide 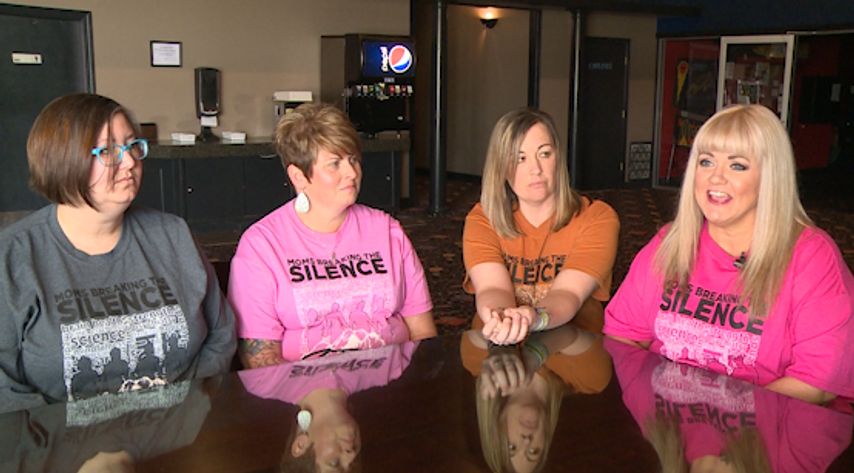 BROOKFIELD –  Angie Wallace, Nycole Griffin, Tosha Lorton and Wendy Morris all lost their sons to suicide. The four mothers banded together and created "Mom's Breaking the Silence." The group focuses on spreading awareness and breaking the stigma around mental health.

The American Foundation for Suicide Prevention reports more than 48,000 people died by suicide in 2018. Suicide is the 10th leading cause of death in the United States.

Wendy Morris lost her son, Ty Sackrey Morris, to suicide when he was 23. Wendy Morris is the manager of the ReelTime Cinema in Brookfield. She said this was the perfect spot for their group's weekly meeting point.

"It's quiet during the day and there are no distractions," Morris said. "There are a pair of red couches that are just perfect. They are our friends couches. A lot of stories have been shared over the year we met on those couches."

"We don't want any other parents in this club," Wallace said. "This isn't a club anyone strives to be in. We will be paying the dues for the rest of our lives."

"It was actually the day before my 40th birthday," Griffin said.

Griffin said "Mom's Breaking the Silence" is all about healing, spreading awareness and keeping their son's memories alive.

"I do go to therapy," Nycole Griffin said. "But, when I'm here with these girls, it's so nice to share our stories. Those couches have heard a lot."

Tosha Lorton lost her son Zayne Lorton to suicide on May 11, 2018. Tosha Lorton said she saw signs of depression when Zayne turned 13.

"Zayne was always the happiest kid," Tosha Lorton said. "Then I noticed something change."

Tosha Lorton said after her son died, she wanted to do something.

"I was actually at a piccadilly in Macon and I had the idea of wanting to start a scholarship in his memory," she said. "I wanted to do something but I really didn't know what. Then when I met these amazing women, it's what we all needed."

The group said the lobby love seats at the Reeltime Cinema have sparked all kinds of ideas with one common group. Their mission is to break the stigma by spreading awareness on mental illnesses, like addiction, depression, anxiety, post-traumatic stress disorder and bipolar disorder.

Angie Wallace said, it all started when they picked their name.

"We actually were sitting on these couches when we thought of it," Angie Wallace said. "One of the boy's friends who was working here at the time suggested "Mom's Breaking the Silence" and we were like yes!"

“Tosha and her big ideas have turned into something wonderful," Wendy Morris said.

The moms hold events all around mid-Missouri.

"We met in April and planned a dinner and auction and actually planned a whole foundation that day that we met over on those couches," Tosha Lorton said. "We worked the concession stand at the demolition derby in Macon. That was fun!"

"We will do honestly everything and anything at least once," Nycole Griffin said.

The group of moms have also brought their stories to schools around mid-Missouri. They have spoken at elementary and middle schools about their sons' stories.

“You get those kids who put their head down but then they perk up when they hear something," Angie Wallace said. "And then they start to realize, they are not alone. Other people also feel like that sometimes."

“All four of the boys have very different stories. Our four boys were not the same," Tosha Lorton said. "Those kids can relate to one of them."

The group's long term goal is to open up a wellness center in Brookfield.

"We will offer different types of therapy," Nycole Griffin said.

"This therapy can be anything from art to music to sensory," Wallace said. "We are not counselors or psychiatrists. We are here as a resource to put people in contact with whatever they may need."

For now, before reaching that end goal, the group is serving all of mid-Missouri.

“We pay for people’s medications when they can't pay for it," Tosha Lorton said. "We paid for someone to get into a therapist that their insurance wouldn't cover.”

March 23, 2020: Speaker and book signing with Kevin Hines. Hines is a global speaker, best-selling author and mental health advocate. Two years after he was diagnosed with bipolar disorder, he attempted to take his life by jumping from the Golden Gate Bridge. The event is free to the public and will be held at the Locust Creek Event Center at at 6 p.m.

March 28, 2020: Trivia Night! test your knowledge with you friends. Entry is $10 per team. each team can have between two and six people. The winning team will take home a cash prize. The event is at Scotty's Auction Service at 6 p.m.

“My son Taylor died by suicide on Oct. 27, 2016. Taylor was a very high achieving kid. He had set very large goals for him at a very young age. He wanted to be valedictorian of his class. He wanted to go to an Ivy League school. He worked towards this his entire educational career. He had a favorite teacher of his, Pat Swift who actually died suddenly Taylor's freshman year of high school. That was probably the first tragic event that had ever happened to Taylor. But Taylor was very involved in high school. Very active in the student council. When he applied for a college, he only wanted to apply for one school and that was Columbia University is New York City. My husband knew his chances of getting in were probably pretty slim but he applied. He got in. His dreams literally -- he achieved. But this is the decline. Taylor never had to experience failure. He had no idea how to handle any kind of rejection. Anything like that. When we look back now; 2020 and we look back we realize even though Taylor achieved so many things in his life, unfortunately, he didn't experience failure as much as he should have. But as parents we don’t want him to experience failure. As parents, my husband and I we were not alarmed by anything he didn't get. I would definitely have more of a knowledge that our kids do need to fail. When we went to Columbia University it was a different experience for him. It wasn't what he hoped. It's not small town mid-Missouri."

"My son Logan died on April 9, 2018. It was actually the day before my 40th birthday. He was the funniest person I've ever known. He was active in school activities. He loved band. He spent most of his free time with his dad and me. We liked to go fishing. We had TV shows that we watched together; 'The Walking Dead' was our big one. He was for the longest time, just a normal kid. Once he got in high school he seemed -- typical teen. He started to have some issues, it seemed like typical teenage behavior. He started to get bad grades, started to sleep a lot, didn't want to eat a lot. I didn't have the resources to know this was the beginning of a mental illness. We didn't know. Logan was our only child so when I say we lost a lot, we lost everything. This is the main reason I do what I do now. We need to make sure no one else has to feel the way we feel. We don't want anyone else on these couches with us."

“My son Zayne died on May 11, 2018. Like Taylor, he was super involved in everything and anything he tried. He was in baseball, wrestling and football. He was friends with everybody. Where it is different, I worked in mental health so I knew signs and symptoms. Around 13, Zayne started exhibiting signs of depression. He was always a super happy kid, never mad. Around age 13, Zayne had a couple episodes at the school. The school called us. We took him to the ER and they said it was nothing. We got him to a counselor which he hated. He begged us to not put him on medication. We had a case manager that met with him a couple times a month but it wasn't enough. He loved art, loved music. He wanted to write songs, he wanted to play songs. He loved video games, hanging out with his friends. I think what really set Zayne off was his dad and I separated. Zayne suffered from generalized anxiety disorder and specialized depression disorder."

“Ty was the oldest of the boys. My son was 23. My son has suffered addictions since he was 16. I never put the two together that my child had a mental problem of some sort. The addiction overtook our lives. I can say I never had the time to worry about his mental health because of the other problems. My child had been in a lot of trouble. He had been to jail. He was in counseling. He had a setback. He was doing good for about six months. In that time, he had a child. Reece is now two-years-old. Ty was a good boy. He loved everybody. He was kind of a class clown. I think I’ve learned that addiction and depression go hand in hand. but I’m kind of like Nicole, I never had to proper knowledge to figure it out. My son was clean when he died. His little boy just turned one. I thought life was good, but it wasn’t."

If you or someone you know is in crisis, call the National Suicide Prevention Lifeline at 800-273-8255, text HOME to 741741 or visit their website for additional resources.