A Different Type of Motivation 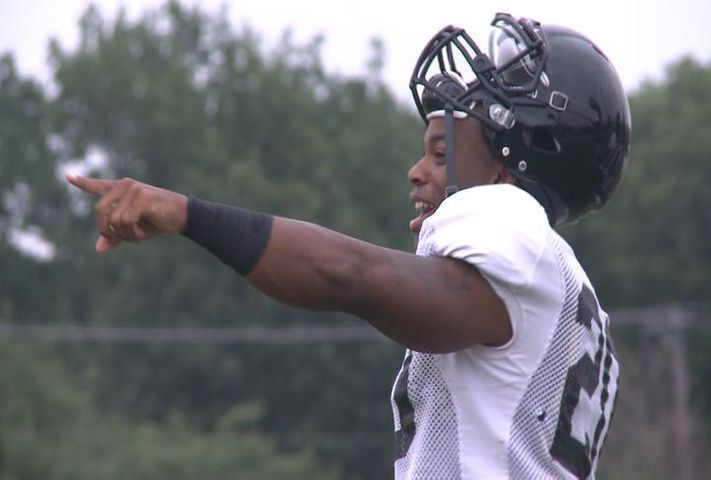 COLUMBIA - Missouri junior running back Henry Josey is a guy who has a lot on his plate, as well as many players on the Missouri football team.

Josey is a college student, a football player in the SEC - what's said to be the powerhouse of all college football conferences, and he's making his return this year from a serious knee injury back in November 2011. During his sophomore year, Josey suffered a season-ending triple tear of his ACL, MCL, and patellar tendon. Recalling his injury can only make him think of something else during the beginning of his college football career.

"We are getting on the bus, just going to the field and then going to the hotel," Josey said. "I mean, I'm feeling great. First game of my college career, I'm excited, and we get back to the hotel and I just have to, I get the call and I'm just looking like oh gosh."

That telling phone call was one that Josey will never forget.

"I was actually there when Henry found out, " teammate and roommate Marcus Murphy said.

Fans had their eyes wide open on the freshman who scored five touchdowns and averaged almost six yards per carry during his first year playing for Mizzou. While Josey was happy with his performance his freshman year, there was always a constant distraction that came from that phone call.

"What am I going to do," Josey said. "I mean I just got to school, the decisions to make, do I go home, do I go ahead and move them here. It was just a whole bunch of things. Like you didn't know what you were going to do and you think about it like you're trying to be that grown man already, but you're not yet, so it was a learning lesson for me."

That distracting phone call told Josey he was going to be a father, a father who had much of his college career in front of him. With all the questions, he turned to Murphy for support.

"Marcus was a big aspect in my life," Josey said. "He was pretty much the guy I just went out of my room and went across the hallway to talk to and just anytime just kicked it with him, went and played games with him just to keep my mind off of everything else."

"We could hangout and just do different things to get his mind off the negative things that come with you know, that was going on," Murphy said. "I was there for him, he was my roommate, you know so he was like my brother."

Josey said he could only hide the fact that he would soon be a dad for so long. Once Henry Josey Junior was born on March 28th, 2011, Josey realized it was time to tell the team and coaching staff.

"I mean he was here, there was no use of trying to hide something that you love and you are going to love so much, so I just kind of stuck with it and told everybody," Josey said.

The players quickly looked up to Josey. He was a player on Mizzou who everyone respected.

"I mean being a student athlete period is something that's hard, and being a father is also something that's great responsibility," Wide Receiver L'Damian Washington said. "And, just to see a guy like Henry handle it, and he has a great support system. His family is great. I respect them a lot, and Henry does a great job with his son."

When it came time to bring Junior around the football team, the players couldn't help but fall in love with the little guy too.

"He was especially around in the summer, and he came around and we got to see him run around," Franklin said. "It's funny cause you go up to him and say hi, or give him a high-five, or whatever, but he will kind of look at you, and then Henry will be like oh no he's cool man and then he will give him a high-five. It was really cool to see that and just see that interaction."

"He's a fun guy," Washington said. "He definitely brings the kid out of the guys and we all sat outside, just played catch with him and just a good time. Definitely to see Henry and the way his son interact together, I mean it's definitely something that will put a smile on your face."

Being around college players, including his dad, makes Henry Junior want to grab hold of a football and run to an end zone.

"Him just living up to my name is something he'll more than do, he's crazy athletic already, it's insane," Josey said.

Henry Junior lives with his mother in Texas. Junior spends time with Josey's grandparents in Texas, as well. Josey said Henry Junior is his biggest motivation in life and because of that, his son has changed the way he lives his life on and off the football field.

"I just have to be that example for him, I don't want him to ever see me as somebody that's not trying to get better in life and not being the right example for him," Josey said. "He looks up to me for everything, I mean he acts just like me. It's crazy."

Sometimes when life tries to knock you down, it's the littlest things, or the littlest people that are there to pick you up.