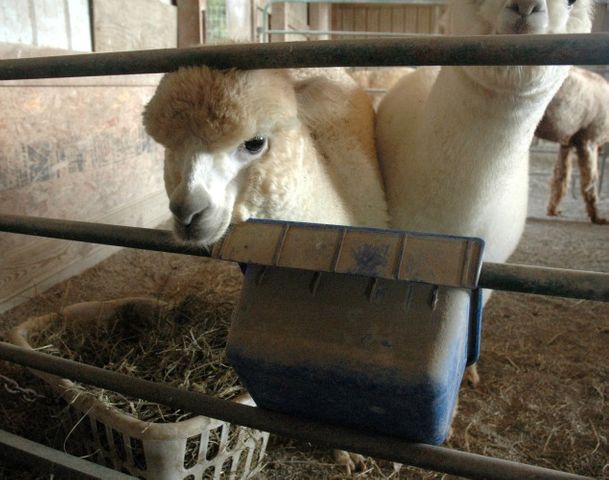 Like many other mid-Missouri animals, alpacas eat hay. But because of an abnormally hot and dry summer, hay is becoming harder to find in this state and others.

"I've probably got about half of what I need to get me through winter," Licklider said. "So I probably need at least another 100 bales to get me through the winter, and that's a hope and a prayer that we don't' have the snow cover and hard winter like we had last year."

Licklider said this was the first time in 10 years he's had trouble finding enough hay to get through winter.

Tommy Sallee, a statistician with the Department of Agriculture, said the problem began around July. It became so hot that grass growth slowed, meaning farmers had to dip into their hay supplies earlier than usual. Then, because they couldn't cut new hay from the grass, hay production decreased as well.

This happened to a greater extreme in other states such as Texas, which were hit with exceptional drought, according to the USDA.

The low hay production coupled with an increased demand have driven up hay prices in Missouri this summer.

Howard County cattle farmer Jason Rimmel says under normal conditions $35 is a fair price for a round bale of hay. Recently, he says they've had offers from Texan farmers for as much as $100 per bale.

So far, the impact of the shortage has not affected the prices of consumer goods.

A rake sits in the Columbia barn of alpaca farmers Gary and Mary Licklider, Wednesday, Oct. 19, 2011. They've had to collect wandering hay from the floor of the barn and use it for feed because the supply of hay is so low this year.

Farmer John Coats lifts a bale of hay in his horse stable in Columbia, Mo., Wednesday, Oct. 19, 2011.Coats said his supply has decreased this year, but he's still managed to get the amount of hay he needs for his horses.