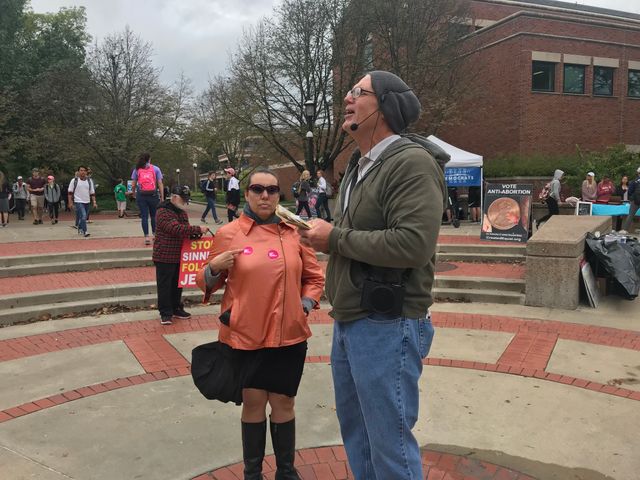 COLUMBIA - Graphic images of aborted fetuses were at the center of the protests by abortion opponents and abortion rights supports on the University of Missouri's campus Wednesday.

The clash came against a backdrop of local and national events involving the abortion issue.

Oct. 1 marked the last day Planned Parenthood in Columbia was allowed to provide abortion services. And on Monday, Justice Brett Kavanaugh began serving on the Supreme Court, raising questions about the fate of Roe v. Wade.

On MU's campus, abortion rights supporters yelled at abortion opponents.  Someone threw one of the graphic abortion posters into a nearby water fountain. The posters belonged to a group called "Created Equal."

It is on a "vote anti-abortion campus tour," traveling to 21 campuses in four states showing students photos of what a fetus looks like after an abortion.

Evangeline Dunn, an outreach intern for the group said showing such graphic images sparks conversation and shows what happens during the abortion process.

"I believe abortion is the intentionally killing of human beings. Therefore abortion is always morally wrong, and these images are a huge piece of evidence that is it a human being at the moment of fertilization and that it is very gruesome," she said.

The abortion rights group I Stand with Planned Parenthood, had a table asking students to sign a petition to help provide Plan B to students.

John Sites, an MU student member of that group said he got involved after going on an anti-abortion tour in D.C. when he was in 8th grade.

"When I was there, I saw all these images that they're showing today's photo-shops of fetuses hands-on quarters and stuff. It was really just nasty. People are just hateful," he said.

Sites said, when he entered college, he met many abortion rights advocates and agreed with their stance.

Some abortion opponents took turns standing on a stool preaching bible scriptures and telling people abortion is the wrong choice.

Michael Stultz, an anti-abortion supporter, said he believes even rape is not an excuse for an abortion.

"The Lord has made that come about. It's hard to explain, but God is in charge of all things, not just the good things, but the bad things," he said.

Abortion rights proponents shouted their answers to that.

"Pro-life that's a lie you don't care if women die," they said.

Abortions are no longer available in Columbia, since a judge ruled Planned Parenthood did not meet certain state requirements to be an abortion facility.

At his confirmation hearing, Kavanaugh said he respects the precedents set by Roe v. Wade, but court watchers say he gives conservative justices the majority needed to overturn the ruling.