Adkison guilty of rape, not guilty of sex assault in Boone retrial 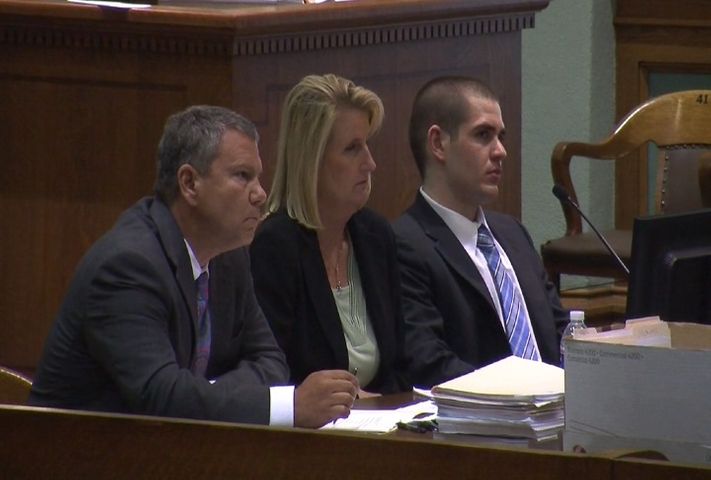 COLUMBIA - A jury reached a verdict Friday in the retrial of the Columbia man accused of the assault and rape of his ex-girlfriend. Just after 11 a.m. the jury found Brian Adkison guilty of rape and not guilty of sexual assault. The judge set a sentencing date for Sept. 14.

During day two of the retrial Thursday, law enforcement officers, nurses and the roommate of Adkison's ex-girlfriend testified.

The first witness Thursday morning was Deanna Allen, a registered nurse for University Hospital who examined Adkison's ex-girlfriend. Allen said she conducted a sexual assault exam, but did not find any sign of injury to the patient's sexual organs. She said such injuries, "do not indicate anything, and are not an accurate measure of there being a sexual assault." Allen said only one out of three patients she examines have injuries to their sexual organs.

The prosecution's second witness, Detective Mitchell Baxley with the Columbia Police Department, took the stand about 9:30 a.m. Baxley investigated the case, and arrested Adkison in May 2013. In a tape of an interview between Baxley and Adkison, Adkison said he went out drinking the night of May 4, and took four Adderall pills before going to his ex-girlfriend's house. He said his ex-girlfriend took Adderall for studying.

In the same tape, Adkison said his ex-girlfriend would "often go from happy to mad, to happy." He added, "she bounces around a lot."

The prosecution's next witness was Theresa Long, a MU med school student who has known Adkison's ex-girlfriend since 2012. Long testified about the day of and the day after the incident.

Gary Davis with the Missouri State Highway Patrol Crime Lab testified next. He said he tested Adkison's ex-girlfriend for drugs. When the defense asked Davis if he had tested her for alcohol, he said he hadn't.

Day one of the retrial ended Wednesday after the victim, Adkison's ex-girlfriend took the stand for the prosecution. She recounted the events leading up to May 2013. The victim said there were events that made her doubt the character of defendant before he allegedly raped and assaulted her. According to the victim, her relationship with Adkison deteriorated post-breakup, adding they were 'cordial not friendly.'

During opening statements Wednesday, the defense said there is no evidence to substantiate the victim's claims and there was 'no rape and no sexual assault.'

The trial was expected to last several days.

Adkison's original trial in Boone County was declared a mistrial on two of the three original charges against him. He was originally charged with burglary in addition to the rape and sexual assault charges. Adkison was found not guilty on the burglary charge.

In addition to the charges Adkison faces in Boone County, he also faces charges in five other Missouri counties. Four of those pending cases are connected to the alleged kidnapping and rape of his ex-girlfriend and subsequent escape from jail. Adkison is believed to have fled to Ohio following his escape and was accused of crimes there before being brought back to Missouri.

[Editor's note: This story is being continually updated with the latest information available.]

Timeline of criminal charges shows what's next for Brian Adkison