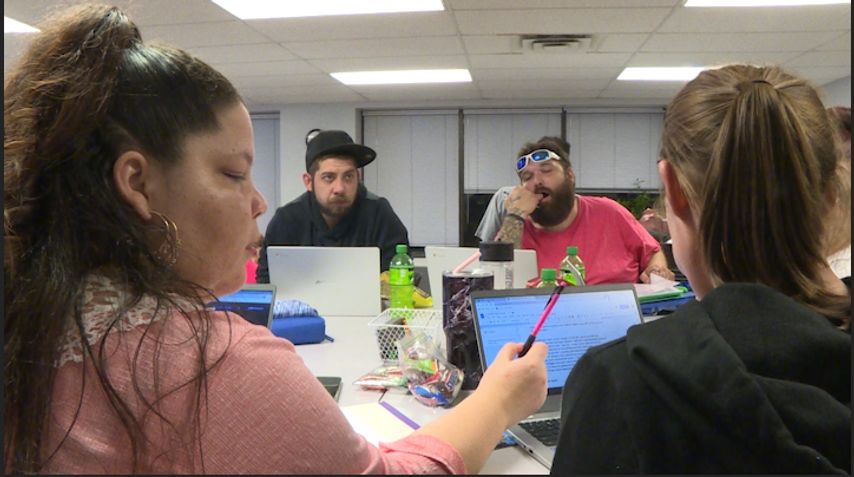 COLUMBIA - Some adults are one step closer to getting their high school diploma.

Adult high schools, also known as the Excel Centers, are designed for those who did not receive a high school diploma.

Metropolitan Employment Rehabilitation Services Missouri Goodwill Industries built four Excel Centers across the state in Springfield, Popular Bluff, St. Louis, and Columbia. The school in Columbia is on Fourth Street in a building formerly owned by the Columbia Daily Tribune.

After finding out about the education attainment rates in Missouri, the director of Columbia’s Excel Center knew he had a job to do.

“As a former high school principal knowing that I lost a lot of kids for one reason or another, I love the opportunity of having a second chance,” director Mike Reynolds said. “Being able to help adults get that second chance is truly a blessing.”

So far 116 people are taking classes in Columbia’s excel center.

“I would love for this school to expand to 300 students,” Reynolds said.

Frank Nejedly enrolled at the Excel Center and said life without a diploma has made it difficult to find a job.

“I've worked for myself for almost the past 15 years,” Nejedly said. “I've never once actually worked a regular job. I mean I worked at Sonic but that didn't last long.”

Nejedly said he mostly has done construction work. He added math is something he uses every day, whether at work or in daily life.

“You can't just think you don't need none of this stuff,” Nejedly said.

Student Jonathon Cooper didn't have trouble finding a job at first. He dropped out of high school to work in construction full time, but a motorcycle hit Cooper over the summer, resulting in the loss of his leg. This left him with an unknown future.

“I don't think I can do what I was doing,” Cooper said. “So I figured might as well get a high school diploma and thankfully they opened up this place to actually help get it instead of just a GED.”

The first term started late October and runs for eight weeks on the first floor. The center houses a day care, six classrooms, and a cafeteria.

Students have the chance to take day or night classes. Life coaches check in with the students to make sure they're on track with their schoolwork and feel supported. MariBeth Couch is Nejedly’s life coach. She describes Nejedly as the "class clown," but said Nejedly has also really stepped up to the plate.

“I feel like he’s a leader at our school,” Couch said. “He always has a positive attitude and he comes in willing to learn. I know that his teacher has commented that he is a leader within the classroom.”

Cooper’s life coach, Sheila Ferguson, said she’s also seen positive changes within in past weeks. When school first started, Cooper was in physical therapy. While he was learning outside of the classroom, Ferguson said Cooper didn't want to miss anything he would learn inside the classroom.

“While he was at Rusk Rehabilitation we took work to him,” Ferguson said. “I went to the front desk and dropped of his work. All of his teachers were great about getting me the work he needed and then I took it over to him and he brought it back when he completed it.”

It was a boost for Cooper as he took on learning how to use his new prosthetic leg.

“As soon as he had it, he was here the next day, showing it off, and walking around,” Ferguson said. “It just looked like his confidence level, not only getting a new leg but being back in school has really up his confidence and I really see it.”

The Excel Center is free to adults. Reynolds said the four centers have roughly 900 students combined.