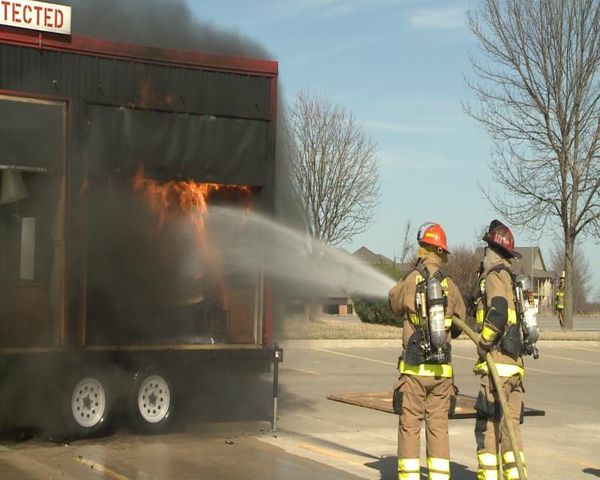 COLUMBIA - The Common Voices Coalition and the Columbia Fire Department teamed up Thursday at Stoney Creek Inn to hold a live fire demonstration and educate community members on fire safety.

Two different fire demonstrations took place. A trailer with two rooms, one with a sprinkler system and one without, was ignited to demonstrate the time it takes to put out a fire. Columbia Firefighters were there to control the flames. It took under one minute for the sprinkler system to put out the fire.

"At one point approximately four to six minutes into [the fire], the entire room will be at 1400 degrees, which is not survivable for any individual, nonetheless a firefighter," Pasley said. "Even with our gear a firefighter cannot survive a flashover event."

The Fire Safety Day also included educational presentations on fire protection by Common Voices advocates and fire department personnel. Common Voices is a coalition of mothers whose lives have been directly impacted by fires.

Donna Henson of Kansas City is one of those mothers. She lost her son Dominic Passantino in May 1999 after a fire at the Sigma Chi Fraternity house on MU's campus. The fire was started by a burning candle, killing Passantino from smoke inhalation.

Since her son's death, Henson advocates for student fire education and strives to put sprinklers in all college living quarters.

"Dominic's room didn't have any safety devices in place to save his life," Henson said. "There were no batteries in the smoke detector, no fire sprinkler system, and had there been, I believe that he would be here today, and I don't want another parent to get that call that I did."

After Passantino's death, Henson pushed the Columbia City Council to pass an ordinance that would require sprinklers in all Greek Houses on MU's campus. The ordinance passed in 2007, three years after Henson began advocating for the change. With the ordinance in place, all Greek houses will be required to have sprinklers in place by 2016. Henson said 85 percent of the fraternity and sorority houses already have sprinklers.

"There were a lot of debates on cost," Henson said. "The fraternities and sororities didn't want to come up with the money to do it, but you can't put a cost on a life. There's been 165 student deaths since 2000 from fires."

According to the latest statistics from the U.S. Fire Administration, Missouri residents have a 1.6 relative risk rate of dying in a fire, which is .6 over the average national risk. Missouri's fire death rate is also 18.2.

"What I spoke about today is the target hazards we have here in our town," Pasley said. "With the economic boom, with the size of the college, the university, we have the University of Missouri, Columbia College, Stephens College, Moberly Area Community College and the apartment boom here in town. That's a lot of individuals that we need to consider their safety on, so there's a lot more residents than there were 10 years ago. What [Common Voices] is doing is bringing this to the forefront and saying 'hey, you're growing fast and you need to step up and make sure that all these people are safe.'"

Aside from supporting the sprinkler ordinance, this was Henson's first time speaking in Columbia about how her son's death has impacted her life.

"It's through that courage and unfortunately through the tragedy that we've seen what she spoke about," Pasley said. "By 2016, all of our fraternities at the University of Missouri will be sprinkled. Unfortunately, it takes tragedy to get there. I don't want to see that happen with any other tragedy, but what they're bringing to the forefront, hopefully this will be a trend and tradition that will can keep going forward with."

Pasley and Henson both said they plan on hosting more fire safety days in the future.