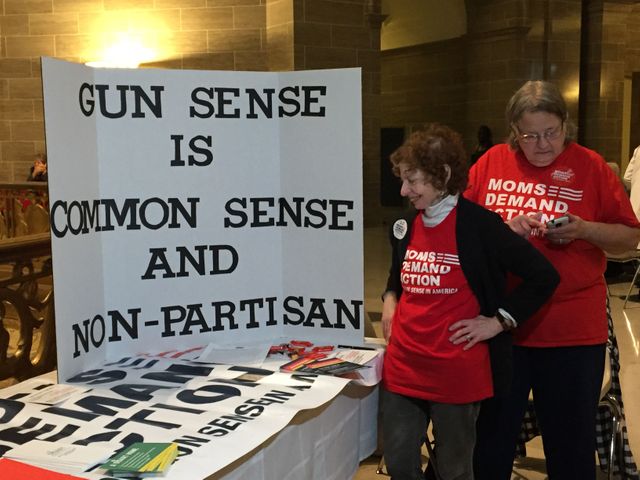 JEFFERSON CITY - Tuesday morning, a group of more than 300 advocates for gun control filled the state Capitol to rally against a House bill that seeks to lessen the number of gun-free zones.

Several Missouri chapters of Moms Demand Action for Gun Sense in America traveled from across the state to talk to legislators about the bill. The bill, sponsored by state Rep. Jered Taylor, R-Nixa, would allow people with concealed carry permits to have their firearms in more places. It would also make it easier for people to bring concealed firearms into private businesses and onto public university campuses.

Kim Westerman of Moms Demand Action said guns do not belong in the proposed places.

"It would allow guns in sensitive places like day cares and bars," she said. "I feel like we can all agree that guns and alcohol don't mix."

But Taylor said eliminating gun-free zones is a safety measure because those zones create targets for shooters.

Westerman said she disagrees: "The majority of people believe in common sense gun legislation. A lot of them are beholden to the NRA, and we want them to know that they report to us, the people and not the gun lobby."

Moms Demand Action for Gun Sense in America is a national advocacy group based in New York. They have chapters in Missouri in Cape Girardeau, Columbia, Joplin, Kansas City, St. Charles and St. Louis.

KOMU 8 News also reached out to a legislator who supported the rally. Rep. Richard Brown, D- Kansas City, said, "I'm very happy to see them here today. Especially in light of what happened last week in Florida. I'm saddened by the events that happened in Florida. However, keep in mind that a lot of people want to blame mental health for the reason we had this tragedy," Brown said. "Mental health did not kill those kids. Guns killed those kids. Bullets killed those kids. If we don't start regulating the weapons we have in this nation, this is going to continue."