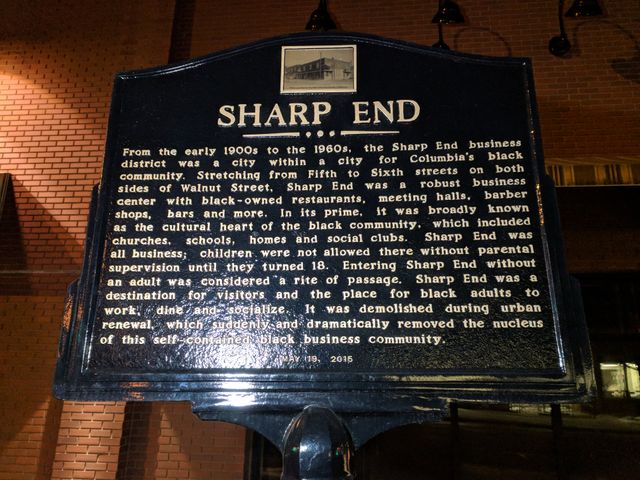 COLUMBIA - "From the early 1900s to the 1960s, the Sharp End business district was a city within a city for Columbia's black community."

That's the first sentence of a plaque on East Walnut Street commemorating the historic Columbia community.

Over the past five years, the commission has placed markers downtown to reflect on the history of Columbia's black community. The commission's services manager Gabe Huffington said the individual markers evolved into a bigger project: a full path going through downtown.

The trail's markers are funded by private individuals, organizations and businesses. The commission said it needs donations for four more markers to complete the trail. Each marker needs about $2,000 to $3,000 in donations to be put in.

The Sharp End district was torn down during the city's urban renewal plan in the 1960s.

Other markers of note include the John William "Blind" Boone Home and the Lynching at the Stewart Road Bridge. "Blind" Boone was a black composer and concert pianist who lived in Columbia in the early 20th century. The house at 4th and Broadway was bustling with music, community and faith.

The marker at the foot of MKT Trail on Providence Road has a bleaker connection to history: a lynching at the Stewart Road Bridge occurred in April of 1923. James T. Scott, a black janitor at MU's medical school at the time, was hanged on the bridge by a mob. Charges were filed against the mob, but no one was convicted.

The African American Heritage Trail still needs approval from the city council. The commission also needs to get an easement from the Lambda Alpha Chi Fraternity, since part of the trail runs by the fraternity's property near the cemetery. Right now, there is no set completion date for the trail.