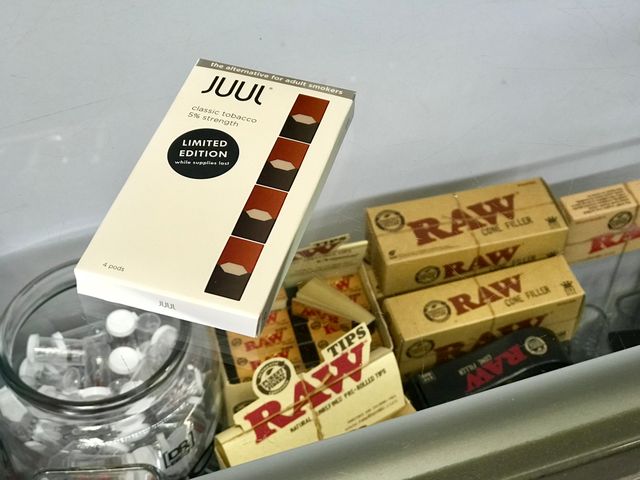 COLUMBIA – Federal health officials announced Tuesday they will be cracking down on the nationwide sale of Juul e-cigarettes to children and teenagers by regular and online retailers.

The announcement comes after months of complaints from parents, politicians and school administrators.

The Food and Drug Administration is specifically focusing on reducing the amount underage Juul users because the device has grown increasingly more popular in the past few years.

“It’s trending right now," said Jacob Hays, a smoke shop employee. "It’s fashionable and nicotine addiction on the people who are young, in school, have their parents’ money to spend it, etc."

He said Juuls have become a powerful cultural phenomenon.

The FDA sent warnings to 40 retail and online stores as part of a nationwide operation against the illegal sales.

“We have a violation rate of about 11 percent. So one out of every ten youth that go into purchase tobacco products are successful during FDA compliance checks,” said Ginny Chadwick, project coordinator at MU’s Tobacco Control Research Center.

Hays said the store he works for, Retro Active Smoke Shop, does “get a lot of kids who try to come in here.” He said they are “usually in groups” and that it’s “pretty obvious” they are underage.

The FDA has asked Juul Labs to turn over documents about the design, marketing and ingredients of its devices. It specifically wants to know whether certain product features of the Juul are appealing to teenagers.

Chadwick said one of the reasons the Juul is so popular is because it’s sold in numerous flavors, which are attractive to young people.

“We know that youth are attracted to those flavors," she said. "What adult wants Fruit Loops or strawberry shortcake? This is a youth-marketed flavor. It’s not drawing in adults.”

Chadwick said FDA figures show 11.4 percent of high school students report they are using e-cigarettes, while only 3.4 percent of adults are using.

The device accounts for 55 percent of the U.S. market for e-cigarettes.

The Juul turns liquid, usually containing nicotine, into an inhalable vapor. The device has become increasingly popular in schools because of its nearly invisible emissions.

Juul Labs has a website that makes it easier for people to locate stores to purchase the device. According to this store finder, there are eight locations to buy Juuls in Columbia.

Retro Active Smoke Shop said it is completely sold out of Juul products.

Hays said he believes many of the Juuls are passed down to underage teenagers.

“Just because somebody comes in here and is old enough to get a Juul, they could buy Juuls for their friends, and a lot of times, I think that’s what happens,” he said.

However, Hays said he believes Juuls are safer than cigarettes.

Chadwick said maybe they are safer for some smokers, but definitely not for all.

“We know that for smokers of combustible cigarettes, it’s a harm-reduction, but for youth, we know that they are entering the tobacco market, and becoming addicted to the deadly product through e-cigarettes,” she said.