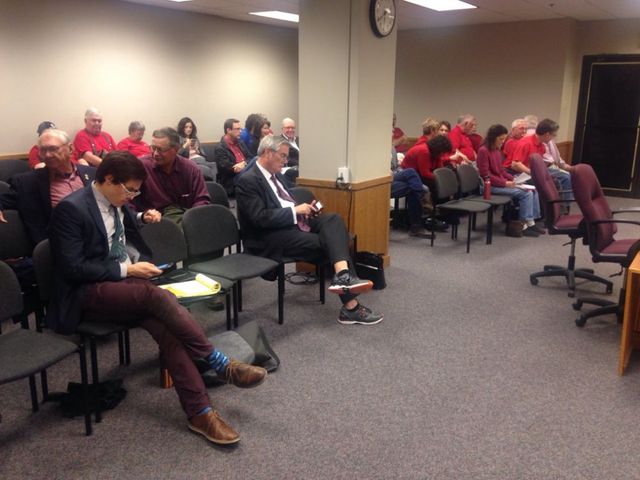 JEFFERSON CITY – It was a sea of red at the Capitol on Wednesday, as a community group gathered to show support for two bills aimed at restricting eminent domain laws.

Eminent domain is the government’s right to use private property for public use.

If passed, these two bills would protect restrictions on agricultural land in Missouri.

HB 640 will demand responsible routing of utilities along property lines, boundary lines and section lines, while HB 795 requires condemners to acquire 60 percent of easements before it obtains eminent domain.

“Once we started researching the law, we found that Missouri’s laws are not as strict and not as tight and there are some loopholes that we need to address,” Walker said.

Neighbors United, a Northeast community group, swarmed to show support for Walker and the two bills. Their support was sparked from Ameren’s Mark Twain Transmission project.

The project runs 100 miles from Palmyra to Kirksville and then north to the Iowa border.

“It’s the restrictions that it places on all the landowners,” Neighbors United Treasurer John Leunen said about the project. “Plus we have no say in it. It just goes where it goes.”

Landowner Walter Spilter said if the bills don’t pass, the power lines could potentially ruin his soil and crop productivity.

Walker said, “If you can’t protect your land your property then what’s left?”

Ameren sent a statement to KOMU 8 News, which said:

The Mark Twain Transmission Project remains in the best interest of the citizens of Missouri. It will deliver reliable energy from renewable sources, such as wind power and economic benefits to northeast Missouri. As part of the transmission building process, ATXI works closely with landowners to address their concerns. We provide good financial compensation and seek to have good faith negotiations to fully and fairly compensate impacted landowners. ATXI remains committed to working with landowners and stakeholders to address any concerns and to thoroughly and responsibly evaluate options to minimize the potential impacts of this project on communities.