Airplane tour brings aviation enthusiasts from all over the country together 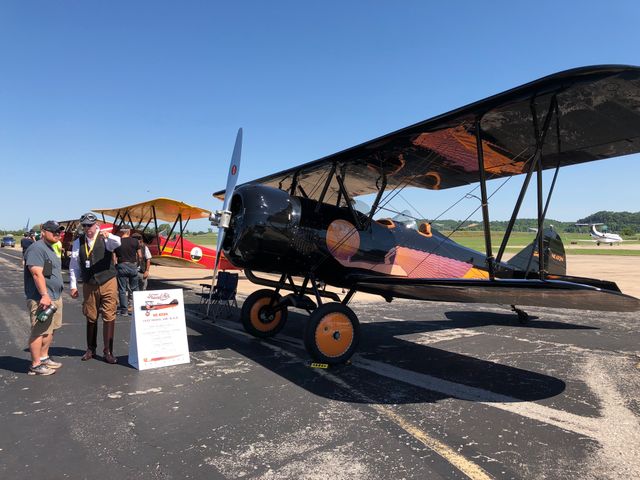 Missouri was the first of five states being toured, including Iowa, Minnesota, South Dakota and Wisconsin. The tour will go until the end of July.

Attendees came to see the exhibition of biplanes and got to hear from the owners of the planes, who also do the maintenance work.

Some attendees, like Ed Twehous, even had the chance to fly over the Missouri State Capitol.

Twehous said he flew during his first visit to the American Barnstormers Tour on Friday.

"It was really cool," he said. "It's smooth, it's like riding a motorcycle with wings, it's just really neat. It's a lot of fun and it's an once-in-a-lifetime experience."

Twehous came back on Saturday to the event with some of his family from out-of-town.

Pilot Glen Frith came from Florida to exhibit his plane. He said some pilots are antique aviation enthusiasts, and others offer biplanes rides as their full-time job.

Some of them flew their planes for almost a week to get to mid-Missouri.

Some of the participants of the tour also work as corporate pilots, like Frith.

Frith said after getting his pilot license he began selling aircrafts to become the owner of an aircraft charter company in Florida.

"So, my day job is flying jets and turboprops all over the United States," he said. "So, I have a passion for aviation, obviously, and then the antique side of it is really my hobby, so I really enjoy it."

Frith said the 2018 tour is a continuation of a tradition that has been going on for many years.

"Locations were picked for their crowd size, we like to see the public come out, their location, the use of the airport," he said. "We typically don't go to airports that have commercial service. We want to go to a smaller airport because it's easier for us to get in and out and do our rides."

Frith said some of the biplanes in the tour date back to the late 1920s.

For that reason, he called the biplanes in the tour "giant history books."

"They're history books with wings," Frith said. "We come from town to town and teach people about the history of aviation, the history of this aircraft type to travel air. And then we give them a flight experience with a short ride."

"These airplanes are not simple airplanes to take care of like modern airplanes," he said. "They have their quirks, they have their eccentricities that you have to do with the engines and the fabric covering, and the different avionics and things that are not in them or some have."

However, he also said their efforts are worthy because they get to preserve pieces of history.

"Without people like myself who enjoy the old airplanes, the antique airplanes, restoring them, flying them, these airplanes would disappear," Frith said. "No one would understand the history that was involved in the beginning of commercial aviation in this country."