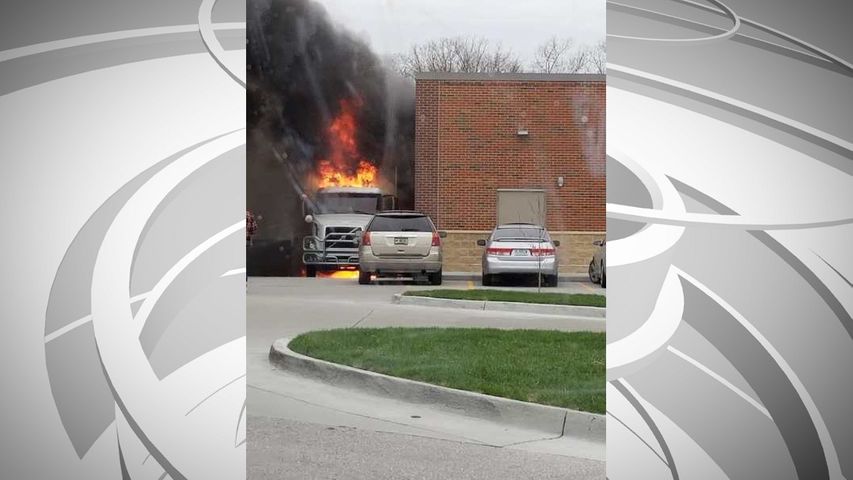 Aldi usually opens at 9 a.m. Monday, but will be closed for the remainder of the day.

The Aldi Store Manager arrived at the building Monday morning just after 6 a.m. to assess the smoke and water damage for the first time.

The fire started at the delivery truck and burned some of the loading dock.

Several people reported seeing the thick black smoke from up to a mile away.

Jerry Jenkins, Assistant Chief of the Columbia Fire Department, told KOMU 8 the flames from the truck blew over to the west side of the building causing fire damage within. Jenkins was unclear about the extent of the damage to the building, but estimated the price of the overall damage in the thousands.

"There was concern that the fire got inside the building, it did activate the sprinkler system. Jenkins said. "There was a little bit of fire that got into the back loading dock area."

Jenkins reported there were no injuries, and that all operations went smoothly.

Lauren Godsy was inside the building during the fire. She said everyone handled the situation well.

"The fire must of started immediately after we went inside because we just had time to go through like one aisle when they asked us to leave," Godsy said. "The fire truck was already there, putting it out. We'd driven right by where that truck was unloading and saw it unloading so everyone must of responded pretty quickly."

Sam Wallace said she always shops at Aldi. She said she didn't know the store was closed until she got there on Monday.

"I'm just hoping they get it all cleaned up soon because, you know, those low prices," Wallace said.

One woman told KOMU 8 on Monday this is the "biggest bummer in town."

The exact cause of what started the fire is still unknown. The department told KOMU 8 they would issue a release in the coming 24 hours with more information.

(This story has been updated with more information.)