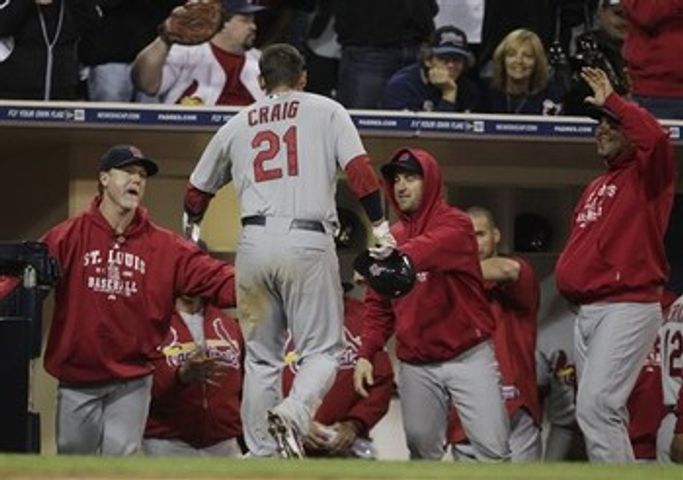 ST. LOUIS (AP) -- Nelson Cruz sprinted over to the foul line, desperately trying to run down Allen Craig's tailing liner. The right fielder came up just short, and so did the Texas Rangers.

Craig's pinch-hit drive landed an inch or two in front of Cruz's outstretched glove for a go-ahead single off reliever Alexi Ogando in the sixth inning that carried the St. Louis Cardinals over the Rangers 3-2 Wednesday in a chilly World Series opener.

On a night when all the runs were driven in with opposite-field hits to right, Lance Berkman put St. Louis ahead with a two-run single in the fourth against C.J. Wilson.

Rangers catcher Mike Napoli watched in dejection as Albert Pujols and Matt Holliday scored, but a few minutes later celebrated in the top of the fifth when he tied it 2-all with a two-run homer off Chris Carpenter.

While the Rangers' bullpen couldn't hold on, five St. Louis relievers combined for three innings of one-hit relief. Not that Texas didn't have its chances -- the Rangers were 0 for 5 with runners in scoring position.

Colby Lewis starts for the Rangers on Thursday night, trying to send the Series back to Texas tied at a game apiece.

Game 1 has been an indicator of success in recent decades: The winner has captured seven of the last eight titles, 12 of the last 14 and 19 of the last 23. In addition, the team hosting Game 1 has won 20 of the last 25 World Series.

A year after making their first World Series appearance, a five-game loss to the San Francisco Giants that opened with an 11-7 loss, the Rangers were back.

Taking over as ace after Cliff Lee left to sign with Philadelphia, Wilson dropped to 0-3 with a 7.17 ERA in four postseason starts this year, allowing three runs and four hits in 5 2/3 innings with a career-high six walks -- two of them intentional.

He prepared for the start by getting in a tank of liquid nitrogen at 295 degrees below zero -- the treatment is said to aid recovery -- but on a blustery, 49-degree night his walks and a key wild pitch got him into some hot spots.

He fell behind after bouncing a pitch in the fourth that hit three-time NL MVP Albert Pujols on the left foot. That started a streak of three bad pitches in a four-pitch span.

Wilson tried to go inside on Matt Holliday but left the next one over the plate, and Holliday hit an opposite-field double into the right-field corner as Pujols took third.

Then, with the count 1-0 to Berkman, Wilson tried to go inside again but allowed the ball to drift over the plate. Berkman went the other way and chopped the ball over first base and into right field as the Cardinals took a 2-0 lead. Wilson shook his head back and fourth as he walked back to the mound.

The lead was short-lived.

Adrian Beltre singled leading off the fifth and, one out later, Napoli turned on a high pitch and sent it about 10 rows deep into the right-field seats for his second home run of the postseason. A fired-up Carpenter had escaped a two-on, none-out jam in the second inning when Napoli hit into an inning-ending double play.

Pujols had Cardinals fans cheering in the top of the sixth when he slid to stop Michael Young's grounder behind first and threw to Carpenter for the out, stranding Ian Kinsler at third.

Then in the bottom half, NLCS MVP David Freese hit an opposite-field double to right with one out and went to third on a wild pitch. Wilson struck out Yadier Molina, then pitched carefully to Nick Punto and walked him on four pitches.

Ogando relieved, and with many of the red-clad Cardinals fans standing and waving white towels, Craig sliced a 1-2 pitch down the right field line. Cruz, the ALCS MVP, came oh-so-close to making the sliding catch, but the ball bounced just in front of his glove as Freese scored. Texas was lucky that the ball struck Cruz on a foot; otherwise, it could have rolled to the fence.

Carpenter became the first St. Louis starter to reach the sixth inning since the division series. He got the win, allowing two runs and five hits in six innings with four strikeouts and one walk. Fernando Salas, Marc Rzepczynski, Octavio Dotel, Arthur Rhodes and Jason Motte followed, with Motte getting three outs for his fifth postseason save.

With one out in the ninth, Beltre was called out on a grounder to third on a ball that appeared to bounce off his foot and could have been ruled foul. The call didn't go the Rangers' way.

It was that kind of night.