Alpaca farm opens to the public 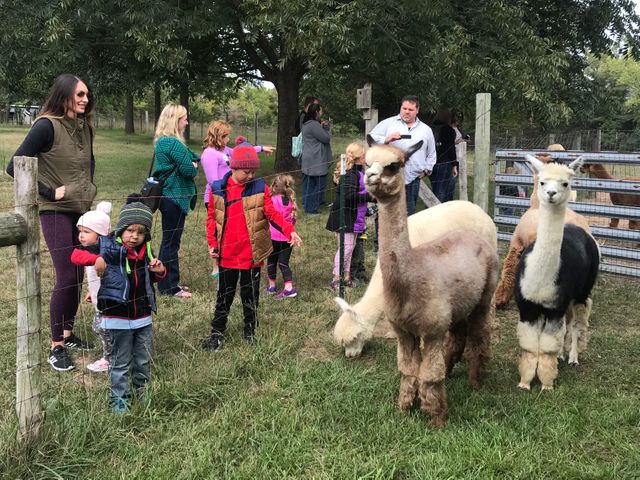 The farm only opens for the weekend of National Alpaca Farm Days and the weekend after Thanksgiving.

Curly Eye is home to 20 alpacas. Gary Licklider, the owner, said the animals produce fleece that he and his wife sell in their shop.

“All of the fleece from our animals is used for comforters or we send it to a mill in Kansas where it’s made into yarn,” Licklider said. “My wife knits sweaters and all kinds of things that we sell.”

Licklider said he and his wife used to own cattle, but alpacas are much easier on the ground and simple to maintain.

“You don’t have to eat them to enjoy them,” he said.

“When my wife and I were both working, we’d sit in the barn after a stressful day with a beer and look at the alpacas and listen to them hum and you know, you just feel all your tension go away,” he said.

Licklider said he opens up his farm on National Alpaca Farm Days to bring awareness to the animals.

“There are farms all across America that are opening up to the general public so they can ask questions and see the alpacas up close and it’s cool,” he said.

Visitors also had the chance to feed the alpacas from their hands. One boy explained how it felt.

“You lay your hand flat like that and they just lick the food off. I was afraid they would bite my hand off, but they did not. It tickles a lot,” 8-year-old Jack Campbell said.

Jack visited the farm for the first time today. Now, he wants an alpaca of his own.

“Well we came here to see the alpacas, probably a couple years later we might buy one,” Jack said.

Licklider said alpacas are too social to be by themselves.

“If you only have one alpaca they’ll quit eating and they won’t survive so you always have to have two,” he said.

However, he said it is not unreasonable to think about getting alpacas. Licklider said his alpacas are cheaper to feed than some of his other animals.

“It doesn’t cost anything to maintain alpacas. My Labrador retriever costs more to maintain than my 20 alpacas,” Licklider said.

Curly Eye farm will also be open to the public Sunday.