Amateur artists get a chance to perform at Roots N Blues 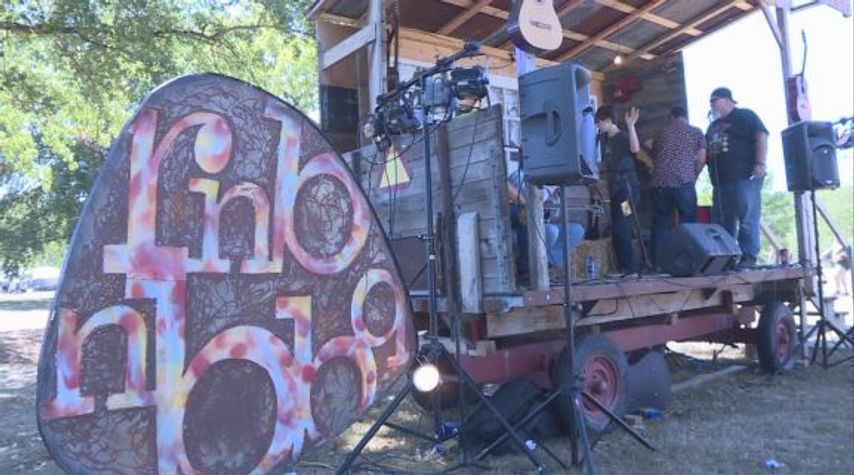 Festival goers will listen to music bands and individual artists like The Bel Airs, Nikki Hill, Leon Bridges and more through Sunday.

President of Thumper Entertainment, Richard King said as the years have gone by, it's gotten easier to book artists because of the growing popularity of Roots N Blues.

"Some of the agents I talk to say 'Hey, when are you going to be looking at 2018? I've got a list of artists I want you to look at'," King said. "That's the fun part because what I've been doing for my entire life is listening to music."

He said more than 30,000 people attended the festival last year, and expects similar numbers this year, partly because of the festival's new cashless feature.

While many of those guests will come for the more well-known artists, some will groove to the tunes at the Front Porch Stage.

The stage sits on the southeast edge of the festival entrance and has guitars, harmonicas, microphones, and a speaker system for artists. Palen Music Center provided all of the instruments and players for accompaniment.

Nate White is a musical artist and employee at the music center. He said the stage is a great way for locals to play with one another and build camaraderie.

"It's kind of like an open mic night, people sign up and play with total strangers. It brings people together, music incites community. This festival does such an amazing job at community and the Front Porch is just a natural by-product of that," White said.

When the Front Porch made it's debut last year, White said people loved the impromptu shows that music lovers created. One artist who performed last year returned to the festival and said the Front Porch is the reason she's pursuing her dreams now.

Emily Delgado sang for the first time in public on the Front Porch last year and started a blues/jazz band soon after.

"It's a really fun way to get out of your comfort zone, go have fun and meet new people who are musicians and make connections and it goes from there," Delgado said. "It could be a 'serious lead' or it could just be something for fun."

The Front Porch Stage will be open for Roots N Blues festival goers to perform all weekend.