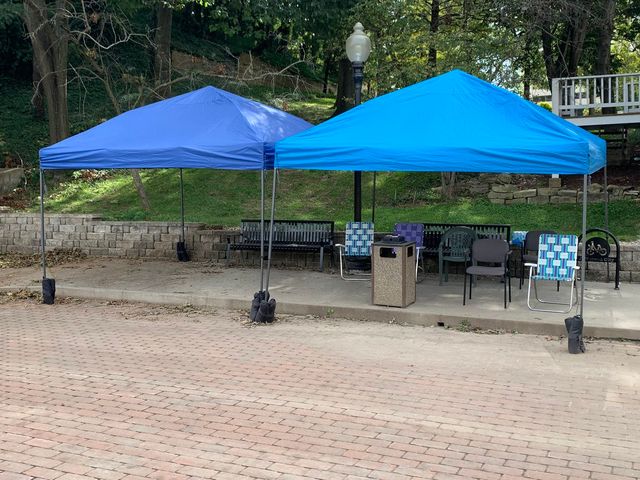 JEFFERSON CITY – Passengers at the Jefferson City Amtrak station will be spending a little more time in the elements over the next few days.

The Union Hotel, an historic building built in 1855, usually houses Amtrak’s indoor waiting room, but is closed until a full structural assessment can be performed.

Through at least the start of next week, passengers will have to wait in a makeshift lobby under two open-air tents with lawn chairs, office chairs and benches for them to sit on.

Missouri State Museum director Tiffany Patterson said the structural inspection is being performed out of an abundance of caution.

“As far as we know, there is no danger to be around the building, but because of some other issues with buildings in Jefferson City over the last year or so, we just decided to be better safe than sorry," Patterson said. "People are more important than having a building open.”

She also said the Union Hotel is in need of certain repairs, such as the replacement of some bricks.

“There are some things that the casual observer can see on the building that need to be repaired,” Patterson said. “So, the big question for the structural engineer is whether or not it is a safe building to occupy, and whether we can continue to operate Amtrak and have the Rozier gallery open in that building.”

Officials from the Department of Natural Resources and Missouri Office of Administration are meeting with an engineer to discuss the project on Tuesday.

Despite the makeshift waiting area, Amtrak’s service is not affected.