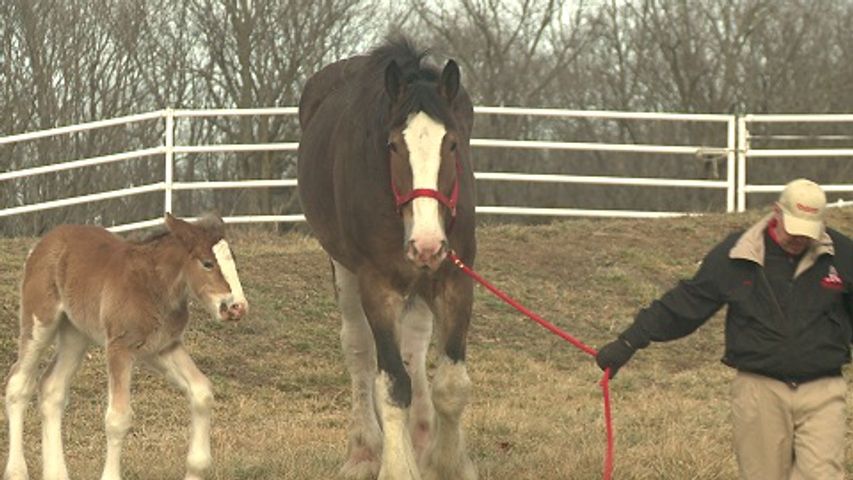 COOPER COUNTY - Anheuser-Busch has used its Clydesdale horses in 23 Super Bowl ads. Now the company is giving the audience, at the game and at home, the chance to name the newest star of its ads; a two-week-old foal.

The Clydesdales are specially bred and reared at Anheuser-Busch's Warm Springs Ranch in Cooper County. And ranch supervisor John Soto says that the company wants to include fans in its ads through the use of such social media sites like Twitter and Facebook.

"They (the company) wanted to have the fans and people following Facebook, the public actually put in names and throw out suggestions on what we should name the baby. And after the Super Bowl, at some point, they'll decide what the name of the baby is, and that's what her name will be," Soto said.

Even though there have been Clydesdale foals featured in Super Bowl ads before, Soto says that this one is particularly meaningful to him and the ranch.

"It's from what everybody in Clydesdale operations do, where we start from the time they're a baby until the time they're on the hitch and everything in-between. Working with them and playing with them when they're yearlings and two year olds and the pride we have at the end of the day when they actually go out and are part of our Budweiser Clydesdale team", Soto said.

And the commericial is not the only media stunt that Anheuser-Busch will unveil this year. According to Soto, the company will be making full use of social media to connect the Clydesdales to their fans.

"We're doing a new thing at Anheuser-Busch this year... what they're calling the Class of 2013... which is gonna highlight all of our babies that are born throughout the year on Facebook, Budweiser.com and Twitter. And they'll update it through the year so you can actually see the babies, see their names and follow them through the year as they grow up", Soto said.