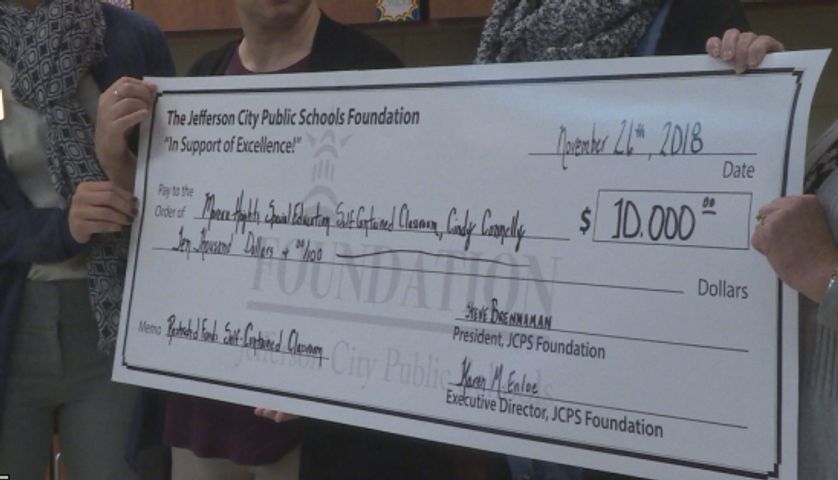 The money was given to the Jefferson City Public Schools Foundation by an anonymous donor. Connelly said she applied for a grant through the Jefferson City Alumni Association earlier in the year, and thought that was what her gift was, but was happily surprised by the amount of money her class received.

Connelly’s classroom consists of six children who all live with a disability. She said all of the children are non-verbal, so many of the lessons taught in the classroom focus on communication skills.

Some of the children are wheelchair bound, fully or partially blind or have autism. Connelly says the gift the class received could give them much needed resources.

“I’ve become pretty inventive in this classroom as far as ‘Okay, this kid needs this so what can we maneuver, what can we make to help that student?’, so now with this money hopefully I won’t have to maneuver and make as much,” Connelly said.

Connelly said she is confident there is equipment and resources out there that can help her students succeed and she is more hopeful now that they have received the gift. Bridget Frank, Director of Special Services with JCPS said the money can be used for a range of things in the classroom.

“Adaptive equipment that can help with motor skills, to toys that help social development, or really a curriculum that helps with just learning in general. So there’s lots of things we can use this money for,” Frank said.

Connelly said at the end of the day this money is not for her it is for the children, and she hopes that the money can help ensure a promising future for all of the kids.