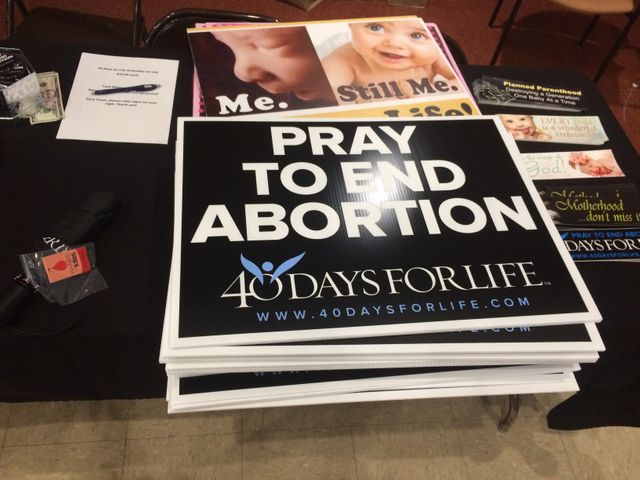 COLUMBIA – An anti-abortion group is kicking off a series of events just days after Missouri Planned Parenthood affiliates asked the U.S. Supreme Court to intervene in a decision that quashed attempts to expand abortion services.

"We are thanking God because, by the skin of their teeth, Columbia lost out on that abortion license and it looks like it'll be several months before the case is heard," said Kathy Forck, co-campaign director for 40 Days For Life of Columbia.

40 Days for Life is a religious based organization that aims to end abortion through prayer and fasting, constant vigil and community outreach. The group plans a prayer vigil twice a year and prays in front of places where abortions are taking place.

"Our goal are first of all, to end abortion," Forck said. "Our other goal is to reach out to women who may find themselves in a pregnancy and they're not quite sure what to do."

Seileach Corleigh, president of the National Organization for Women (NOW) for both the Columbia and Missouri chapters, said 40 Days for Life shouldn't stand in the way of women seeking an abortion.

"We think it's outrageous that people are trying to get between a woman and her doctor in order to interfere in these medical decisions," Corleigh said.

Forck said she knows her group is making a positive difference for many mothers.

"I've actually held babies that we're scheduled to be aborted at the Columbia Planned Parenthood," Frock said. "It made me feel really good to know that those little eyes are looking up at you, if I had not been there to help to his mom, he probably wouldn't be here."

Tuesday's rally kicks off the 40 Days For Life campaign in which participants fast and pray for 40 days in front of Planned Parenthood in the hopes to end abortion. It's set to end in November.