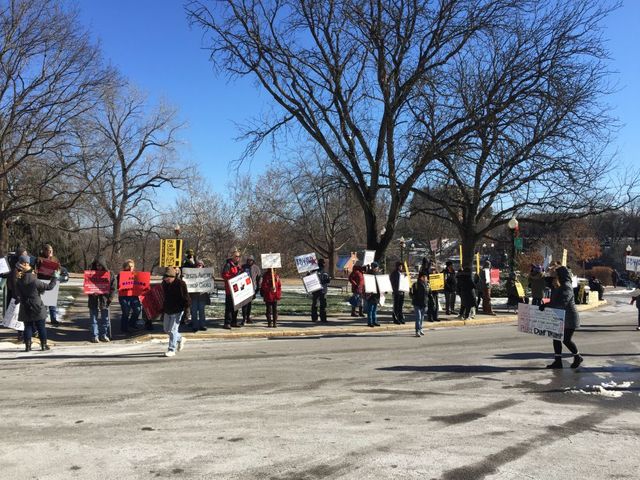 JEFFERSON CITY – Anti-Trump protesters stood in the frigid temperatures outside Missouri’s Capitol on Monday to have a silent demonstration.

They stood just a few hours before the electors voted at 2 p.m. all in favor for Donald Trump as president and Mike Pence for vice president.

Protesters urged the electors to not vote for Trump saying he was an “unfit president.”

Missouri wasn’t the only capitol experiencing this; all around the nation protesters gathered outside state capitol buildings trying to sway the electors to reconsider the presidential outcome.

Electors in every state met and cast their votes: one for president and one for vice president.

Many of the protesters contend Russian hacking unduly influenced the election and they point out Democrat Hillary Clinton won the popular vote.

Though Trump was still favored to win, the protesters held a silent demonstration as the electors arrived to convey how they felt their voices were heard during the election.

Dan Sterkin, a protester and Russian native, said he feels that what his family escaped in Russia is essentially what the U.S. is seeing now.

"The dream outcome is for the electors to do what their duty is and not elect Donald Trump to become president. He is unfit to be president," Sterkin said.

Around 1 p.m., protesters filled the Capitol and a handful were able to sit in on the electors casting their vote in the Senate Lounge.

Trump supporters who were also there declined to comment.

Members of the U.S. House and Senate will meet Jan. 6 at 1 p.m. and count all of the nation’s electoral votes.