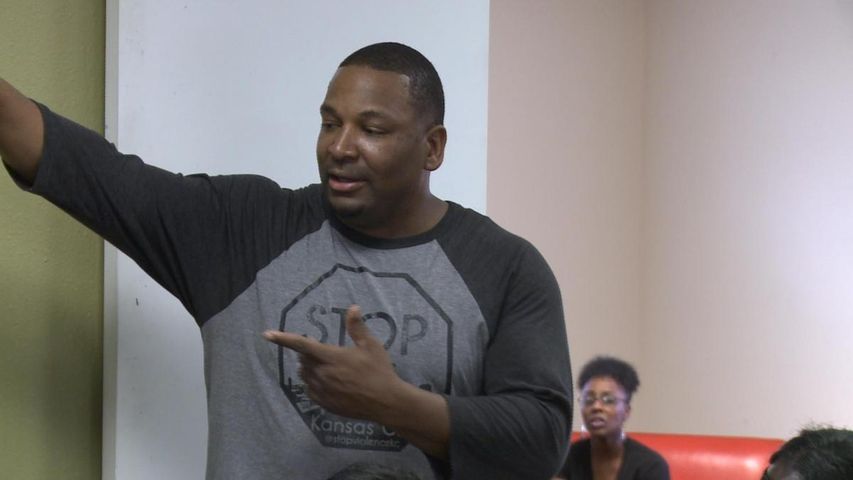 The All Girls Everything Summit, sponsored in part by Stop the Violence Kansas City, brought high school-aged girls together with men and women in their 20s and early 30s. After a panel discussion that included a clip from the critically acclaimed film "Bully," the girls headed to workshop sessions to learn more about career options and financial aid for college.

Stop the Violence Kansas City founder Torrance Ray said marches and vigils are temporary, and real change only happens when a community bands together. He said one of his group's main goals is to coordinate with other anti-violence groups in Kansas City to create a comprehensive anti-violence movement where each group does something a little different.

Ray said the best way for city leaders to reduce violence is to look at the problem proactively rather than reactively. He said Kansas City leaders should consider trying to broker a ceasefire among the city's major gangs, citing a 1992 truce between Los Angeles' Crips and Bloods gangs. That truce ultimately did not last, but gang violence in Los Angeles remains far lower than it was prior to the ceasefire.

"If the Bloods and Crips can do it in California, which is a larger threat, then here in Kansas City, we can do it as well," he said.

Community groups in Columbia are also taking varied approaches to reducing violence. At The Intersection, children from kindergarteners to 12th-graders work on school assignments and play games every day after school. Founder and executive director Dana Battison told KOMU 8 News the peak hours for young people to get into trouble are in the afternoon and early evening after school, between 3 and 7 p.m. She said the key is to give children who have limited adult supervision at home a safe place to go. In addition to providing activities and help with homework, Battison said The Intersection teaches conflict resolution skills. For example, she sometimes has older children watch movie clips or news stories and then discuss how the people featured in them could have solved their problems differently.

Efforts are also underway to create new alternatives for young Columbians. Anthony Stanton, the vice president of the Douglass Park Neighborhood Association, said the Columbia Boxing Club proved very popular with youth in the past. The club is currently inactive, but efforts are underway to restart it. He said martial arts training like this does not promote violence because it teaches people to respect what violence can do. In addition, Stanton said such training teaches discipline and respect for authority because not following instructions leads to immediate consequences in the form of defeat. Moreover, he said involving people in structured activities puts them in a safe environment. Lawson said club membership would most likely be tied to grades and community involvement to encourage youth to give back to the community.

While activists laud volunteer efforts to reduce violence, they say there are several areas where city leaders can help. For example, University of Missouri-St. Louis criminology professor Richard Rosenfeld said housing policy can play a major role in deterring violence. He said city planners should reject low-income housing projects in favor of mixed-income neighborhoods, spreading out poverty rather than concentrating it. He said doing this has been linked to lower levels of crime. Rosenfeld also recommends concentrating police in crime hot spots, a strategy the St. Louis Metropolitan Police Department currently pursues. He explained criminals stick to familiar areas because they know the escape routes, where valuables are kept, and who they can trust. As a result, hot-spot policing does not displace crime to other parts of the city. In addition, Rosenfeld said St. Louis and Kansas City are both considering establishing dedicated armed offender dockets in courts. He said this would set up a dedicated system to deal with homicide and other weapons offenses and ensure a consistent legal response to such crimes.

Columbia Public Schools superintendent Chris Belcher said CPS is experimenting with an Alternate Center for Education (ACE) for students who have received out of school suspensions. He said this keeps suspended students in school and allows them to receive counseling. Belcher said all of Columbia's high schools are part of the A+ program, which pays two years of tuition at community colleges. He praised Moberly Area Community College in particular for working with local four-year universities to help students enter those institutions without losing too many credit hours. Belcher noted many jobs don't require four-year college degrees and said greater investment in training for such jobs would provide students with a greater variety of pathways to success.

In the year since Deaudre Johnson's death sparked a community-wide conversation on violence, one made national by December's tragic shooting at Sandy Hook, officials and anti-violence activists say they have taken a more comprehensive approach to preventing violence. Lawson said completely eradicating violence is impossible, but proactive measures will do much to reduce violence if cities invest in them.