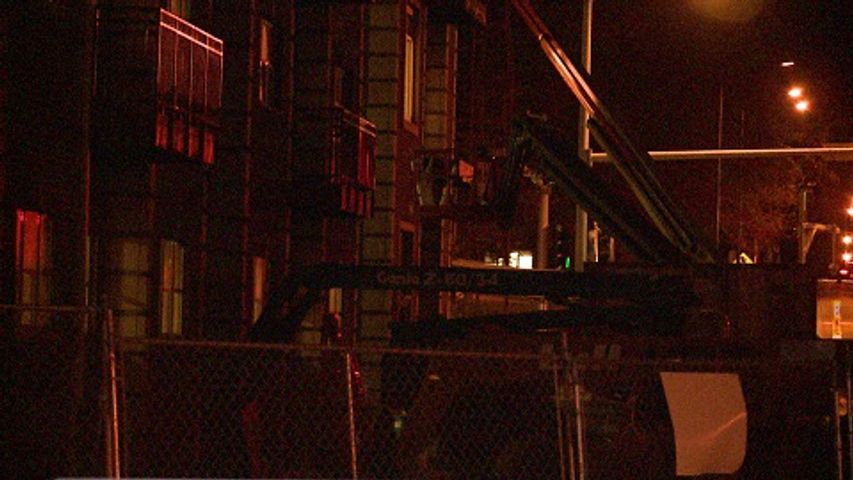 "I'm just trying to maintain schedule," said Matt (who refused to give KOMU 8 News his last name), a project manager with Trittenbach Development, LLC--the construction company working on the site.

According to chapter 16 of the city ordinance, "It shall be unlawful to interfere with or disturb the peace and quiet of neighboring inhabitants by demolishing, constructing, altering or repairing any building or structure other than between the hours of 7:00 a.m. and 7:00 p.m. on weekdays, and between 9:00 a.m. and 5:00 p.m. on Saturdays."

The project manager said he knows the company is in violation of the city noise ordinance by continuously performing construction past 7 p.m., but the company has yet to receive any tickets from police.

"We don't use equipment after hours. We're trying to be as respectful as possible to them," he said.

By "them," the project manager means the 128 residents who currently live in the College Avenue side of the corner facility.  According to residents, their peace and quiet has been disturbed for several weeks because of loud construction, both inside and outside of the building, before and after the hours specified in the ordinance.

City of Columbia Building and Site Development Manager Shane Creech said Brookside, in conjunction with the construction company, received extended construction hours permits for only two days in May, shortly after the fire, for the purposes of removing the large debris and prevent traffic congestion at Walnut Street and College Avenue.

But, Creech said in verifying information with both his staff and the city's public works department, he found there have been no permits requested by the complex or issued recently.

"In this case, it sounds like it's something they [Brookside/Trittenbach Development] wants to do for their own gain that they could be doing during normal working hours," Creech said.

The project manager verified this assumption, telling KOMU 8 News, "it's a risk reward" to get the 148 Brookside residents temporarily living in Stephens College dormitories moved in by Friday.

It's a risk reward that apparently caused current residents of the Brookside on College location to receive false information from the apartment complex's customer service department.

KOMU 8 News obtained an e-mail from the complex to residents, a portion of which reads,

"In an effort to make sure everything is ready when they move in, we have obtained a permit to work 24 hours/day for the next week. We enjoyed this permit throughout the summer months and it was extremely helpful in moving everyone in before the start of school. Please understand that there may be a few disruptions the next few days with work beginning early and ending late. We'd like to apologize in advance for any inconvenience this causes. As I mentioned, the second round of move-ins are occurring Thursday 10/18 and Friday 10/19 so the additional working hours will not last too long."

KOMU 8 News verified with the project manager that the e-mail sent to residents contained false information.  He said it was "major miscommunication" between the Brookside complex and the construction company.

In learning of the false information, University of Missouri senior and first-floor Brookside on College resident Zach Jacobsmeyer said he feels "pretty shocked, really. I mean I really can't say I'm surprised though, just with the way [Brookside's] dealt with some other issues around here, and so I mean in reality, that really makes me mad.  Basically, I just have to sleep with earplugs."

Brookside Properties General Manager Justin Atwood refused to return KOMU 8 News calls. An e-mail, phone calls and a voicemail to the apartment complex's customer service department also went unreturned.  A leasing agent did answer the phone but said no one could comment on the issue. Calls to Trittenbach Development to verify the project manager's full name went unanswered, as well as calls to a Matt Hollrah listed on a company project document.

The project manager said he was uncertain whether the construction would continue post-7 p.m. Wednesday evening, but he did say late-night construction stopped last night shortly before midnight when police arrived in response to a noise complaint.