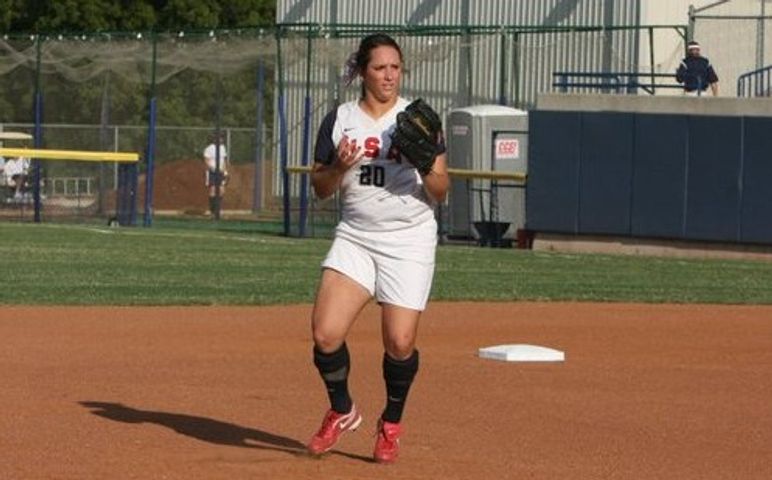 OKLAHOMA CITY, OK - Valerie Arioto fueled a three-run sixth as the 2011 USA Softball Women's National Team rallied to defeat Australia 5-2 Friday evening at the World Cup of Softball VI in Oklahoma City. The Americans led 2-0 through the fourth but the Aussies fought back, scoring single runs in the fifth and sixth innings to tie the game.

Stacy May-Johnson reached on an error and Brittany Schutte was intentionally walked with two outs as Arioto came to the plate in the bottom of the sixth. Arioto then delivered her first hit of the night at a most critical time, a bases clearing triple to right to put Team USA back on top. She then scored on a single to left by Taylor Hoagland to push the score to the eventual final margin.

Keilani Ricketts picked up the win in relief. Ricketts threw 1.1 innings, allowing just two hits and one walk before Chelsea Thomas came in to record the game's final out with the tying run at the plate.

Team USA jumped out to a 2-0 lead in the fourth as Rhea Taylor reached on a bunt single and stole second before coming around to score on a single to right center by May-Johnson. Schutte then doubled to left center to score Kaitlyn Cochran who had reached on a fielder's choice earlier in the inning.

Australia cut the lead in half in the top half of the fifth. Verity Long-Droppert singled to third and advanced to second on a passed ball before moving to third on a sacrifice bunt by Michelle Cox. She then scored on a Clare Warwick single to left to trim the Team USA to 2-1.

The Aussies plated the tying run in the sixth. Back-to-back singles from Chelsea Forkin and Brenda De Blaes gave Australia two runners aboard with just one out. Team USA starting pitcher Jordan Taylor was then lifted in favor of Ricketts. Pinch hitter Jodie Stevenson came through with an RBI single to left to score Forkin but Ricketts struck out Long-Droppert and got pinch hitter Jade Wall to groundout to end the threat.

Ricketts gave way to Thomas with two outs in seventh with two runners on board via a walk and a single. Thomas struck out Forkin to end the game and record her second straight save of the World Cup.

J. Taylor threw 5.1 innings, allowing two runs, just one of them earned, on seven hits and one walk. She struck out seven of the 24 batters she faced. Team USA recorded seven hits off three different Australian pitchers but none more important than Arioto's two-RBI triple.

"I had little butterflies but it wasn't pressure," Arioto said. "It was something that I wanted to do. I wanted to be up at bat and be the one to do it. I just wanted to stay relaxed."

The Red, White and Blue return to action Saturday with a doubleheader, including the noon Susan G. Komen for the Cure benefit game against Canada. Team USA also faces Japan, which features Olympic Gold Medal winning pitcher Yukiko Ueno, at 8 p.m. Canada holds a record of 2-1 in the tournament while Japan is 2-0 after two extra inning victories.