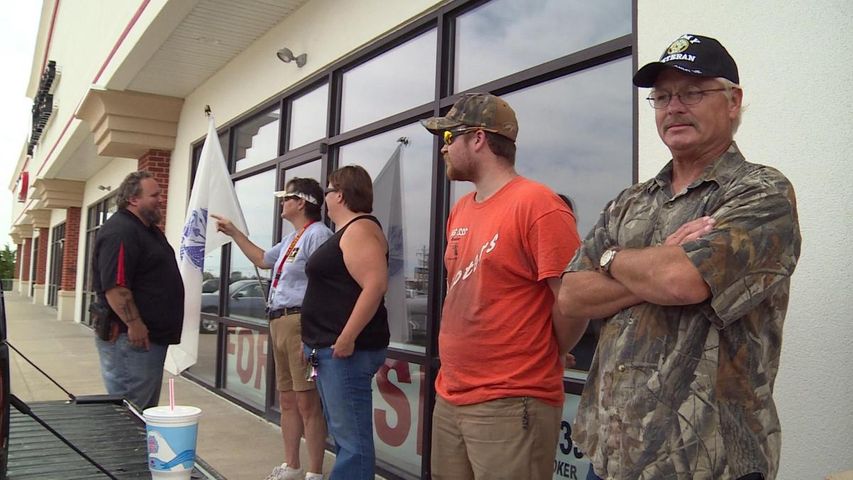 JEFFERSON CITY - The sight of armed civilians standing guard outside of the military recruitment office in Jefferson City is provoking strong emotions.

Laura Harrison, one of the demonstrators, says, though the local community seems very supportive, she has seen many negative comments on social media. Many accuse the armed group of being vigilantes and question their ability to protect the military personell working in the office.

The show of force came after four Marines and a sailor were killed at a similar site in Chattanooga, Tennessee last week.

Harrison said men and women in the military are not allowed to be armed while they are working in the recruitment center. She said she hopes the demonstrator's actions will raise awareness for the safety of the soldiers at home. She says she invites anyone who is concerned by the demonstrators behavior, to come speak with her.

"It's easy to stand beside the scenes and criticize what's happening, but I would love to have a conversation with them in person. Hopefully, some of those people will come forward and we can have a civil, educational discussion."

Harrison said, in the three days she and her friends have been standing guard, the police have never confronted them.

Sgt. Steve Dappen of the Callaway Sheriff's Department said the demonstrators are breaking no laws.

"Any gun can be openly carried on public property, as long as it's not displayed in a threatening manner," Dappen said.

Harrison said she and the other demonstrators will stand guard until policy changes.

"We're going to stand here until these men and women are allowed to defend themselves."