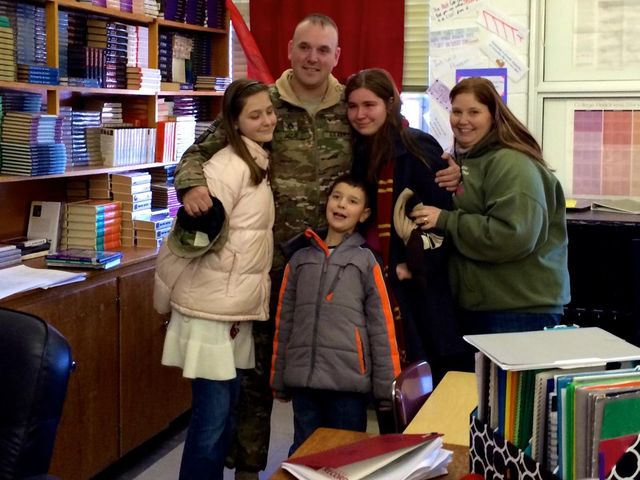 MEXICO - Seventeen-year-old Mykaila Hoyle thought it would be a typical day, full of Mark Twain and vocabulary in Ms. Silvers' class at Mexico High School, Monday. She was very wrong.

With her head in a book, her father, Staff Sgt. John Hoyle, walked into her English class, two months before she expected him to return home from his deployment with the US Army. Hoyle left Mexico in February 2012 for training before departing for Afghanistan later that year in July.

All three of the Hoyle kids expected their dad to be home in April, but Mandi Hoyle said his assignment progressed quicker than expected allowing him to return home. Mandi Hoyle told KOMU 8 News it was her husband's idea to surprise the kids at school.

"He wanted this to be something memorable. It's been a rough deployment. He wanted something they could smile about and think was funny," she said.

This is Staff Sgt. Doyle's second deployment with the US army. He joined 12 years ago, and recently signed up for an additional six more years of service. Before serving in Afghanistan, Doyle served his first tour in Kosovo. He also aided in the recovery efforts following Hurricane Katrina. When John Doyle is gone, Mandi Hoyle said the family shifts their routines around his deployments. She said it's crucial to stay focused when he is gone, and the family piles around the computer to Skype.

"A lot happens in six to eight months. They want to tell him everything, but then the Internet goes out," she said.

Mykaila Hoyle said she had planned on talking to her dad about school and college searching during a hoax-Skype date the kids thought was scheduled for Monday night. She said she does her best to keep busy and lean on her friends when her dad is away.

Mandi Hoyle said her youngest son, Liam, has a difficult time when his dad is gone. "Every time he would see a solider, or something solider related, he would cry because that reminded him of dad and dad wasn't home," Mandi Hoyle said.

For now, John Hoyle is home.

The couple met in Nevada almost two decades ago when they were high school students. Mandi Hoyle said it was her hairdresser and his mother that got "bees in their bonnets" and set the two up. They met over a haircut and married a year later.  "I knew at that moment I met someone who was going to change my life," she said.

The couple will celebrate their 18th wedding anniversary this June.

Following the reunion at Mexico High School, Sgt. Hoyle and his family continued the celebration and went to lunch. The family walked out of the school hand-in-hand and all-smiles.