Army Vet reminds parade attendees, "It's not a sin to be patriotic" 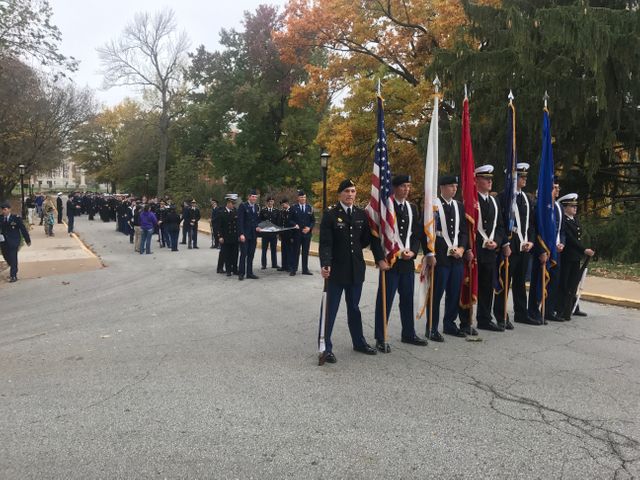 COLUMBIA- “It's special every year. It's just a highlight for me to make a note of and I think it's okay for folks to be patriotic,” Roderick Cox, Mizzou Military Veteran’s Alumni Association president, said.

As an invested volunteer and army veteran, Cox spoke at the Courthouse Sunday for the annual Veteran’s Day Parade.

“It's a good time to just stop and reflect and give thanks to those that make things possible,” he said.

The parade started at the MU Columns and ended at the Courthouse for speakers and performances to salute veterans.

Bystanders stood on the streets waving miniature flags as members of the Army, Navy, Air Force and Cub Scout Pack 992 all marched down eighth street.

“I love Veteran’s Day. It’s so nice to see all the parades and everybody so excited,” Paige Cox, Roderick's daughter said. “It's always a spectacular event.”

Being an “army brat” changed her life and gives her an appreciation for the lifestyle, she said.

In Roderick’s speech, he outlined the importance of patriotism and its daily worth.

“It's not a sin to be patriotic, I urge you to honor our service members and the veterans not just this week, or next Saturday on Veteran's Day, but every day.”

The parade is one of many events, such as the Wreath Laying Ceremony, in support of Columbia's Veteran's Week.