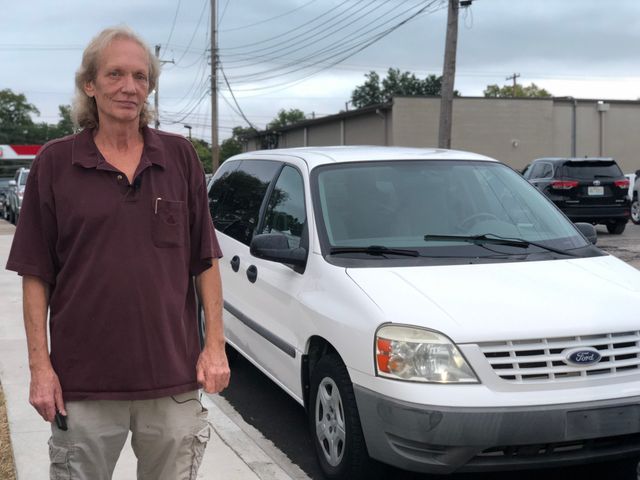 COLUMBIA - 'Welcome Home' and 'Cars4Heroes' gave a new car to an Army veteran who now makes a living out of his passion for art.

"My job right now and what I've decided to do with my life is to create art," Robert Scott Gardner said. "I had a small, compact vehicle and I paint often large. So, when I would be asked to bring paintings to a show or to exhibit some place I can't get them there myself."

He's recently gotten a lot of attention, including here on KOMU.com, and said he is not used to being well-known.

"A month of two ago I was headed to the grocery store, 9:30 at night, and I came home and a woman sent me a message on Facebook saying, I just saw you I think at the grocery store. Aren't you the artist?" he said.

Gardner said for years he hid secrets he didn't want to tell (including his IV cocaine addiction), so it's "unusual" but "gratifying" to be recognized.

He said he felt honored when people, who might not even know him personally, helped him get a new car.

"It's very humbling. I guess it's the best word to say because most of my life I haven't felt like I deserve that," he said.

Gardner went into the Army in 1976 and said he excelled. He got a good-conduct medal and left the service with an honorable discharge.

After getting out of the military, Gardener said, he struggled with drug abuse but got sober for a while. He got married and studied art at Maryville University in St. Louis, then things took a downward turn.

"At the time, I was doing very, very well,” Gardner said."I was selling art, back in the 80s, to people that knew me. My wife at the time kept wanting me to put it into a gallery but I didn't have the confidence to do that yet.”

Before finishing his degree, Gardner said, he got divorced and his wife took almost all of his work and sold it to a gallery in St. Louis because he owed her some money.

"A couple of years ago I was watching TV and there was a show on the 'Starz,' the movie channel, and I'm 99% sure that as I was watching this show, a piece of my art was sitting hanging on wall in the set of this show, in a mansion and I'm like, that's my painting," he said.

Gardner began struggling to cope with trauma stemming from his time in the military. He began abusing drugs and came close to being on the streets. He reached out to the veterans' support group Welcome Home, which helped him get back on track.

That's where the new car comes in. The Founder of Cars 4 Heroes, Terry Franz, said every year the organization helps between 200 and 300 people with a car.

"I've been giving cars away to help people in need for 23 years," he said. "Cars 4 Heroes is all about helping our veterans, active-duty military and first responders and/or their families."

The organization, based out of Kansas City, gets cars to give away through donations

Franz described his partnership with Welcome Homes as a "perfect mix."

"Somebody gets into Welcome Home because they need a place to stay, the VA takes over, then they get into HUD-VASH housing and we're kind of that last link," he said. "If we can get them a car, they can get to a job, they can get to the VA. In Scott's case, it's part of how he's going to make it a living, it's get his paintings around."

"Part of that process in helping a veteran transition and get back to a greater quality of life that they deserve is to have reliable transportation, to get to and from work, to get to and from the store, things that we might take for granted on a daily basis with our vehicle,” she said.

Sievers said she is confident the new car will help Gardner develop his business even further.

"For Scott, since he has gotten back on his feet and is doing phenomenal, this will provide him that one extra step up and order to even do more and go beyond probably what he thought he could do before,” she said.

Gardner said his new car represents an opportunity of growth for him.

"Maybe I'd be able to eat better next month," he said. "I survive, I have found ways to get by, people say I'm resilient. I eat okay, and I've got a roof over my head, but this will open up some new doorways for me, I believe."

Gardner now plans to donate his old vehicle to Welcome Homes, so someone can fix it and give it to another person in need.

His art can be seen on his Facebook page. Gardner created the Facebook hashtag #LookForTheBeauty, and shares some of his photographs that way.