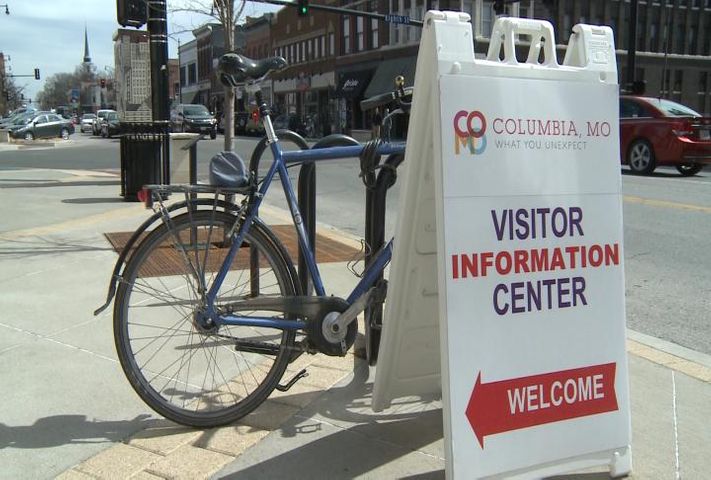 COLUMBIA - While Columbia tourism continues to improve, one aspect may be on the decline. Since moving locations in 2012, the Columbia visitors center has seen a significant drop in traffic.

The visitors center was formerly located off the Lake of the Woods exit on I-70 East. In its last two years, the center saw 3,223 visitors. Since opening its new location at city hall in September 2012, the center has only seen around 530 visitors. Based on the recorded numbers, that's an 88 percent decrease in traffic.

Columbia Convention and Visitors Bureau Director Amy Schneider said the old location wasn't getting the success it should have.

"We had the Lake of the Woods for several years," Schneider said. "We didn't feel that it was getting the traffic we thought it needed, and we saw throughout the years that the numbers were slipping from visitors. So, we were trying to find a way to connect the community as well as connecting visitors coming to the community, and also to utilize a space in the bottom of city hall that wasn't being utilized at the time."

Schneider said the recorded numbers don't speak for the success of the new location. While the visitors center was staffed daily at the Lake of the Woods, the city hall center is only staffed by volunteers from Thursday through Saturday. As a result, Schneider said there are now fewer efforts to track the number of visitors coming through each day.

Schneider said people are increasingly getting visitor information online, which may be another reason for less recorded traffic at the visitors center.

"Most of the time in this day and age, people are not utilizing visitors centers as much due to electronics, apps and websites," Schneider said. "More people are getting online, more people are web savvy and tech savvy and they go online to get all of their information. I will think there is always a need to have someone there...for that face-to-face customer service value. There's a lot of value in just having someone there to greet and to answer questions. No matter how tech savvy you get, it's always nice to have a friendly face."

It's not only the visitors center noticing the online transition. Hotel owners are also shifting their marketing efforts to target people online.

Susan Bell is the general manager of the Hampton Inn and Suites at the University of Missouri. She said her marketing efforts have changed to cater to the internet audience.

"People are doing less straightforward advertising and more relationship marketing," Bell said. "There's much more use of Facebook and Twitter and things like that, but I think it's also changing how people feel about what they should put out there."

The tax helps fund the Columbia Convention and Visitors Bureau and local festivals like True False and Roots N' Blues.

"When the hotels see an increase, that's usually, we're usually the first ones to start seeing a pattern of a better economy because people have to travel for business to get that new business that they're going to, you know, it's going to make them prosper," Bell said.

Bell said the increase in revenue is due to more visitors and higher room rates. In 2013, the average hotel room in Columbia was $77.06, up from $75.57 in 2012. There are currently 35 hotels in Columbia, which amounts to 3,655 rooms. Bell said she only expects tourism to continue growing with the economy.

Two hotels will also open this spring, including The Broadway hotel downtown and another Holiday Inn Express at Stadium Boulevard and Highway 63.